Farmer vows to rebuild from the ashes 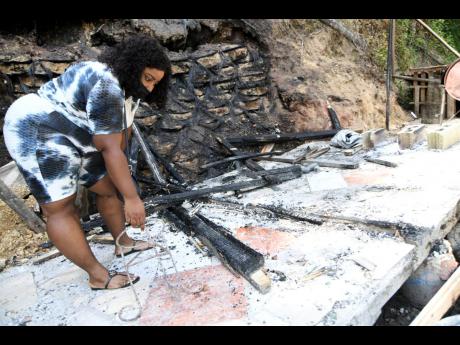 Rudolph Brown/Photographer
Tiffany Spence surveys the charred wreckage of her cookshop in Cassava River, St Catherine, on Tuesday. The damage is believed to be the work of arsonists.

The darkest hour for a trying chicken farmer began at 12:53 a.m. on Monday, when she got a call that her happy-hour establishment in Cassava River, Glengoffe, which she opened six weeks ago, was allegedly set ablaze by arsonists.

Tiffany Spence, a mother of two, supplied chicken to the community school, but with the shift to online classes because of the pandemic, she had to restructure how she generated income and began operating her new business.

Things picked up quickly, and the establishment soon became the talk of the town.

As the first of seven no-movement days imposed by the Government to curb the coronavirus outbreak approached, she investing an extra $200,000 into stock for her dual-role cookshop and tuck shop.

That stock, plus the money spent on the start-up, have now gone up in smoke.

The farmer has children ages seven and 11, with the latter preparing to start high school at Meadowbrook High in September.

Dejected yet determined, Spence is adamant that she will rebound from the catastrophe. She found solace in the robust sales that had caused word of her business success to spread in a short time, captivating the community.

“I’m going to rebuild, because seven times rise, seven times fall. This nah stop me. This is just the beginning,” she said, glancing at the debris.

Spence estimated the value of the financial hit to be in excess of half a million dollars, including approximately $200,000 in appliances. That toll does not capture the cost of damage to the building, she said.

Only a partially burnt deep freeze was salvaged.

The businesswoman said she was unsure if other recent crimes, such as a car-bombing on the weekend, were linked to the alleged attack.

The fire brigade reportedly assisted with cooling-down operations. The Glengoffe police confirmed that an investigation has been launched.