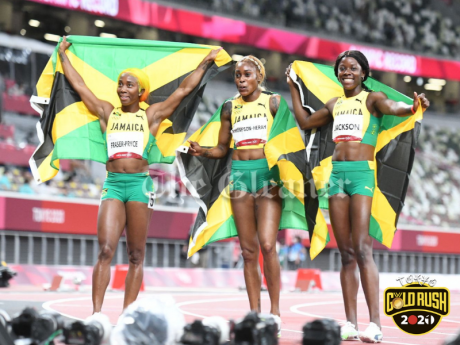 The Minister of Culture, Gender, Entertainment and Sport, Olivia Grange, has praised Jamaican women sprinters, led by Elaine Thompson-Herah, for sweeping the medals in the 100 metres at the Tokyo Olympic games in Japan on Saturday.

Thompson-Herah defended her Olympic title by setting a new championship and Jamaican record time of 10.61 seconds in the final to become the second fastest woman on the all-time list.

Thompson-Herah won ahead of compatriots Shelly-Ann Fraser-Pryce (10.74) and Shericka Jackson (10.76) who ran her personal best time.

Minister Grange said it was one of the greatest achievements in Jamaica's sports history.

“My tears flow for a grateful nation. Jamaica leads the world in female sprint. I want to congratulate Elaine Thompson-Herah on successfully defending her Olympic title. She has made our small nation extremely proud once again, winning gold in a new Olympic Record of 10.61 and becoming the second fastest woman of all time. I am overwhelmed," Grange said.

She added: "I want to also congratulate Shelly-Ann Fraser-Pryce on her silver medal. She worked very hard and she's deserving of being on the podium. I also congratulate Shericka Jackson on winning the bronze. Again, I have to commend her. She has really shone and she has really made us proud. So, for the second time in Olympic history, Jamaica has swept the podium places. What a great nation."

"I'm so happy as the Minister of Sport and I'm sure all of Jamaica shares my joy. At home the pans and the pots would have sounded. Clean sweep Team Jamaica."