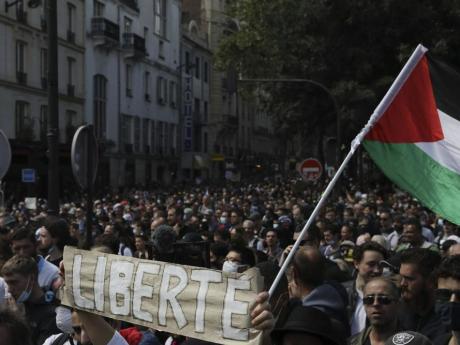 Protestors hold up a banner which reads 'freedom' in French during a demonstration in Paris, France, Saturday, July 31, 2021. Demonstrators gathered in several cities in France on Saturday to protest against the COVID-19 pass, which grants vaccinated individuals greater ease of access to venues. (AP Photo/Adrienne Surprenant)

PARIS (AP) — Thousands of people protested France's special virus pass with marches through Paris and other French cities on Saturday. Most demonstrations were peaceful, but sporadic clashes with riot police marked protests in the French capital.

Some 3,000 security forces deployed around Paris for a third weekend of protests against the pass that will be needed soon to enter restaurants and other places. Police took up posts along the Champs-Elysees to guard against an invasion of the famed avenue.

With virus infections spiking and hospitalisations rising, French lawmakers have passed a bill requiring the pass in most places as of August 9. Polls show a majority of French support the pass, but some are adamantly opposed. The pass requires a vaccination or a quick negative test or proof of a recent recovery from COVID-19 and mandates vaccine shots for all health care workers by mid-September.

Across the Alps, thousands of anti-vaccine pass demonstrators marched in Italian cities including Rome, Milan and Naples for the second consecutive week. Milan demonstrators stopped outside the city's courthouse chanting “Truth! “Shame!” and “Liberty!” while in Rome they marched behind a banner reading “Resistance.” Those demonstrations were noisy but peaceful.

For anti-vaccine pass demonstrators in France, “Iiberty” was the slogan of the day. The marches drew some 204,000 people around the country. Some 14,250 people hostile to the pass protested in Paris, several thousand more than a week ago.

Hager Ameur, a 37-year-old nurse, said she resigned from her job, accusing the government of using a form of “blackmail.”

“I think that we mustn't be told what to do,” she told The Associated Press, adding that French medical workers during the first wave of COVID-19 were quite mistreated. “And now, suddenly we are told that if we don't get vaccinated it is our fault that people are contaminated. I think it is sickening.”

Tensions flared in front of the famed Moulin Rouge nightclub in northern Paris during what appeared to be the largest demonstration. Lines of police faced down protesters in up-close confrontations during the march. Police used their fists on several occasions.

As marchers headed eastward and some pelted police with objects, police fired tear gas into the crowds, plumes of smoke filling the sky. A male protester was seen with a bleeding head and a police officer was carried away by colleagues. Three officers were injured, the French press quoted police as saying. Police, again responding to rowdy crowds, also turned a water cannon on protesters as the march ended at the Bastille.

A calmer march was led by the former top lieutenant of far-right leader Marine Le Pen who left to form his own small anti-EU party. But Florian Philippot's new cause, against the virus pass, seems far more popular. His contingent of hundreds marched Saturday to the Health Ministry.

Among those not present this week was Francois Asselineau, leader of another tiny anti-EU party, the Popular Republican Union, and an ardent campaigner against the health pass, who came down with COVID-19. In a video on his party's website, Asselineau, who was not hospitalised, called on people to denounce the “absurd, unjust and totally liberty-killing” health pass.

French authorities are implementing the health pass because the highly contagious delta variant is making strong inroads. More than 24,000 new daily cases were confirmed Friday night — compared to just a few thousand cases a day at the start of the month.

The government announcement that the health pass would take effect on Aug. 9 has driven many unvaccinated French to sign up for inoculations so their social lives won't get shut down during the summer holiday season. Vaccinations are now available at a wide variety of places, including some beaches. More than 52% of the French population has been vaccinated.

About 112,000 people have died of the virus in France since the start of the pandemic.