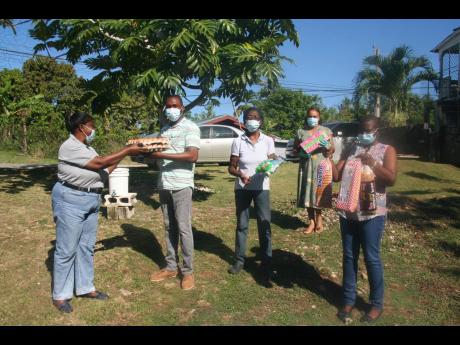 Andre Lawrence, the newly minted president of the Hanover Justices of the Peace Association (HJPA), has hit the ground running as just days after his elevation to the position, he has made his presence felt in the Cacoon Community Development Committee (CDC), where he has thrown his support behind their breakfast feeding programme for children.

Last weekend, Lawrence journeyed to Cacoon, along with other executive members of the HJPA, participating in the feeding initiative and handing over much-needed foodstuff to the Cacoon CDC for the programme.

Lawrence told The Gleaner that Christeen Hooper-Johnson, chairman of the CDC, is an executive member of the HJPA, and when she mentioned the breakfast programme at a recent meeting, he felt the urge to assist.

“I see this project as a great initiative by Mrs Hooper-Johnson. She has taken on to serve the residents of her community, as what we are all sworn to do as justices of the peace, even though it is in a different capacity, but I really admire what she is doing,” said Lawrence. “I think that it is only prudent that I lend my support to her at this time.”

Lawrence said that the project was discussed with the other executive members of the organisation and they all gave it their blessing.

“What I intend to do is to identify some of the other vulnerable communities that are in need of something like this (the feeding programme) that will assist them and go into those communities and try to implement some of these initiatives through the HJPA Welfare Committee,” said Lawrence.

Lawrence’s plan falls in line with the vision of Minister of Justice Delroy Chuck, who urged Hanover justices in a recent meeting to go out into their communities and lend as much assistance as possible to the residents, including assisting them to access government services and even to get vaccinated.

Hanover Custos Dr David Stair recently described the members of the HJPA as a group of volunteers that are focused on assisting their respective communities to become better places for the residents.

“One of the main things that I appreciate about your group is that your focus is not on yourselves. You are looking outside of yourselves for the betterment of the people of this parish,” Stair stated at the time. “Such an attitude is what all JPs volunteered to adopt.”