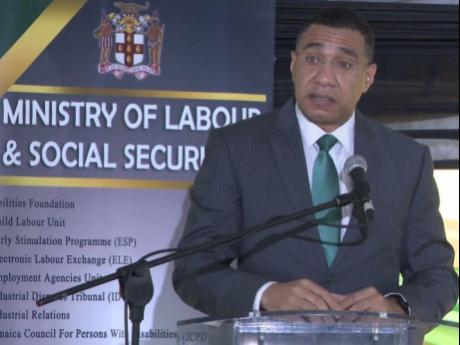 The Holness administration is sticking to its decision to permit mining in the ecologically-sensitive Puerto Bueno Mountains, also called the Dry Harbour Mountains in St Ann, the tourism-dependent parish on Jamaica's northern coast.

Prime Minister Andrew Holness gave the update this afternoon in a pushback against the 'rubbish' from some environmental interests demanding a change of course.

Holness insisted that the Government has made an “enlightened” decision in confronting the need for economic growth while ensuring sustainable development, especially in a pandemic that has claimed jobs and much-needed revenues.

Holness did not give explicit reasons about why he signed off on a recommendation in July to overturn the National Environment and Planning Agency's (NEPA) decision not to grant Bengal Development Limited a permit to mine the area, home to endangered and endemic species.

But it was clear that the initially projected $635 million in taxes and up to 100 jobs weighed heavily on the decision to discard NEPA's May 2020 verdict.

Under the law, an entity denied a permit can appeal to the environment minister, Holness in this instance, who is empowered to have the final say.

The Jamaica Environment Trust, residents of Rio Bueno, and the Opposition People's National Party have demanded that Holness reverse the decision.

But that is not being considered, as Holness told a small gathering at a ceremony in St Ann today that if Bengal violated the 72 conditions applied to the permit, "I'm the first one to shut it down".

Criticisms that the Government was prioritising economic and private interests to the detriment of the environment have been upsetting, Holness charged.

'It hurts me deeply when people say that."

"A strategy of protecting the environment is ensuring that people have livelihoods," Holness said, noting that the land in question is in need of upgrades because of what he said were illegal dumping.

"The land is being degraded all the time, but yet there's concern that we're going to develop the land. And the truth is, if it is done properly we would then have proper ownership of the land, put proper systems in place, and the environment would benefit from that," he continued.

He added: "The public narrative, as if to suggest that the Government is just going out there destroying assets without any form of consideration, that is not true."

"I rubbish that," he declared, as he started a more than half-hour presentation in defence of his administration.

"Every single development must have as its main objective how to protect, preserve and promote the environment," Holness told the ceremony that was held to mark the opening of the $539-million parish office for the Ministry of Labour and Social Security in St Ann.

Bengal is expected to mine about 123 acres of the 569-acre property that is part-owned by Duane Blake, son of late 'Shower Posse' boss Vivian Blake.

The rest of the land is expected to be transformed into an ecotourism attraction, and residential and commercial operations.

Asserting that "I'm entitled to defend myself" against the criticisms, Holness said he has considered “equity and justice” in the matter.

Jamaica World, for whom Bengal is a subsidiary, is to absorb the monitoring costs, which have not been revealed.

The company on Wednesday downplayed the environmental concerns, noting that actions such as blasting will be kept to a minimum.