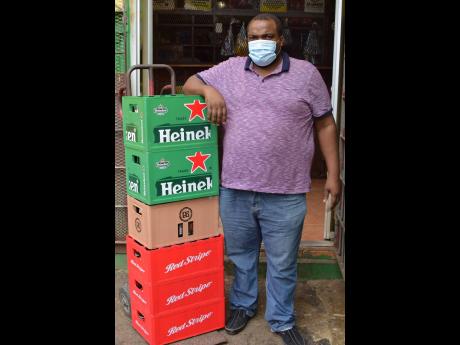 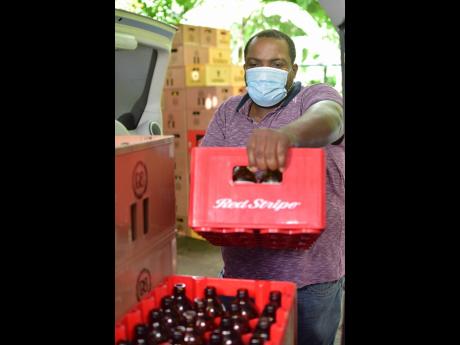 With the economic uncertainty of recent times, business owners are forced to get creative in order to remain viable. St Andrew wholesaler Lincoln Lewis has made returning glass bottles a solid second stream of income. The 44-year-old husband and father of two says he has been able to provide for his family off the strength of his bottle returns.

Lewis started LGOC Wholesale 14 years ago after being laid off from his regular nine-to-five, with no way of supporting his family. Necessity being the mother of invention, Lewis refused to sit idly by while he and his family suffered, choosing instead to channel his business sense as an established wholesaler. Over time and with a deep-seated desire to succeed, LGOC Wholesale afforded him a comfortable living for him and his family.

After running a profitable business for many years, and like other small businesses, LGOC Wholesale did not escape unscathed from the onset of COVID-19. “The pandemic has changed the business a lot and things have gotten a little bit slow; a lot of people not working right now, so less people can afford to do as much shopping,” he explained.

Now navigating the challenge of trying to make ends meet, the businessman decided to take a closer look at opportunities that were literally right in front of him. “I’ve been in the bottle business for quite some time and I know that Red Stripe has been buying back bottles from the very beginning, because back in the day I used to return bottles one-one for cash,” he said.

Lewis is now prioritising bottle returns, selling more Red Stripe products and encouraging his customers to return them to his wholesale. With returns of up to 500 crates per week, Lewis has been generating income that is helping to keep his business afloat at a time of economic uncertainty.

Beyond the cash benefit, Lewis is an advocate for the environmental benefit of bottle returns. Recycling bottles means fewer of them will end up in landfills, less resources will be required to dispose of that waste, which will ultimately mean lower pollution.

It’s a twofold benefit the beer manufacturer has actively been promoting. As part of the Heineken Company, Red Stripe has always championed sustainability. Through its Red-Cycling campaign, the beer company has intensified its efforts to encourage customers and consumers to return its bottles for their benefit and that of the environment.

“At Red Stripe, our operations have always been intrinsically motivated by our profound responsibility to the people in the communities in which we serve, and how it can be leveraged to create significant transformation. Our role as nation builders takes on added significance, particularly in times when the shadow of social and economic hardship looms so largely over the nation. Our primary objective as a company has always been to encourage Jamaicans like Mr Lewis to create lasting change that will create both personal and shared benefits of a better future,” said Dianne Ashton-Smith, Red Stripe’s head of corporate affairs.

As an incentive, Red Stripe doubled the refund amount for glass bottles at the start of 2019. Consumers get $20 for each bottle, and $600 for a full crate of empties within its portfolio of products, including Red Stripe, Red Stripe flavours, Heineken, Smirnoff Ice, Dragon, Guinness and Malta.

With no intentions of easing up anytime soon, Lewis is encouraging other Jamaicans to consider bottle returns as a business. For him Red-Cycling has turned trash into treasure. “Bottles right now is my life, man, trust mi. And if me can do it, then anybody can do it!”