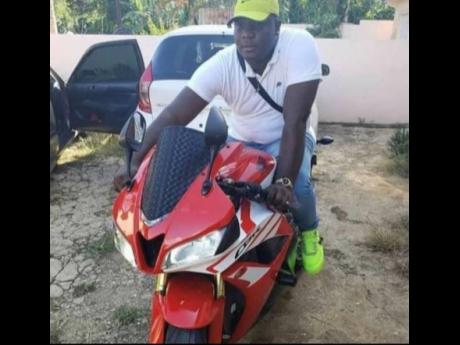 Contributed
Constable Kamal Foster, who died in a crash on the weekend.

Knowing the opposition from his dad which would meet his decision to purchase a motorcycle, Constable Kamal Foster waited more than a month before breaking the secret to his dad. Last Saturday, roughly six weeks since the day of truth, the 29-year-old constable lost his life in a collision while riding his bike.

“Mi never know him buy the bike. Him buy it in July, but mi never know until the 6th of August. Mi ask him why him buy the bike and mi never know. Him say mi never tell mi because him never want mi argue with him,” 59-year-old Audley Foster told The Gleaner yesterday as he grieved the loss of his son, who relatives and friends say was always fun, willing and helpful.

While trying to steady his cracking voice, the elder Foster said the youngest of his three boys was well off transportation wise.

“Him have car – a nice Honda car with sport rims and a good set (sound system), and everything weh a young man would want,” he said.

The distraught elder Foster, who will turn 60 soon, said he will be missing a key figure the rest of his life.

“When him dead, mi lose my life. Him call me so often ... . If mi nuh have anything, mi can count on him,” he said. “If him say him a come look for mi today, don’t look for him then. A di next day him a come. Dem say boy pickney sometimes disrespectful to dem parents. Well, in front a my face, him never rude to mi yet.”

Reports are that Constable Foster was killed after being hit from his motorcycle while travelling along the Rock Hall main road in St Andrew on his way home from work around 9:40 p.m. on Saturday.

The driver of the Nissan car in the collision, who was hospitalised following the crash, has been warned for prosecution as investigations continue.

One of the constable’s brothers, former Gleaner sports journalist Anthony Foster, is also shaken by the tragedy.

Speaking with The Gleaner yesterday, he said that he has heard news of similar tragedies frequently, but was devastated that it was now at his door.

“It’s a difficult feeling. When anyone lose a loved one – a person that you are close to like that – it’s always going to be a bad feeling ... . This hurts so bad. He was always willing to play that supportive role,” Anthony said, reflecting on his younger brother.

Anthony told The Gleaner that the entire family is taking the news hard and even a WhatsApp family group has not been the same since.

“We have a cousin’s group on WhatsApp. He was the most jovial person in that group, quickest to respond, faster than everyone to give his opinion or share anything ... . When we have cousins’ reunion in Siloah, St Elizabeth, he always want to come. He will be missed,” the grieving brother reflected.

Quite the sportsman, the young Kamal captained his Manning Cup football team at St Mary’s College.

“He was a team man. ... I covered a few of his games when I was at The Gleaner,” Anthony recalled. “Though they always getting 12-love and dem score deh, ... I always tell him that it is good to represent his school in something.”

Constable Foster also leaves behind a wife and a child.