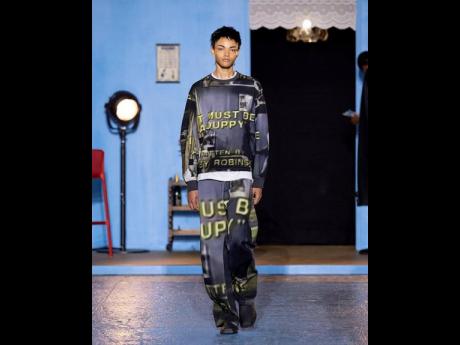 Contributed
‘Must be a duppy,’ are the famous words from Oliver Samuels in ‘Oliver at Large’. These words are now emblazoned on this Bianca Saunders tracksuit for all to wear. 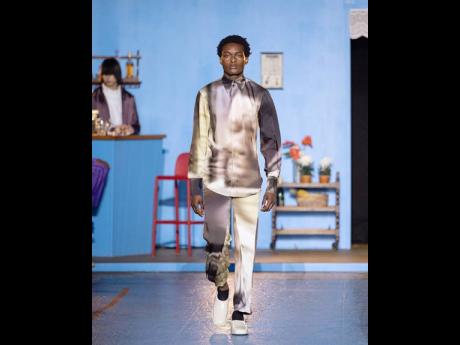 Contributed
A silk shirt and pants with Oliver Samuels’ face as the print. 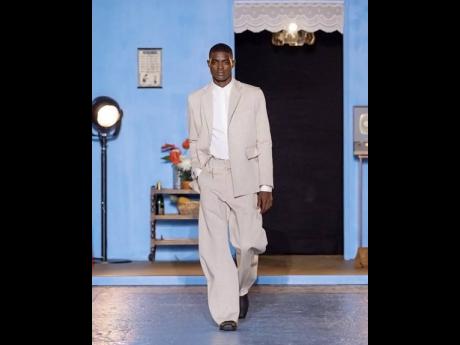 Contributed
Wide-leg trousers are key to this two-piece men’s suit. 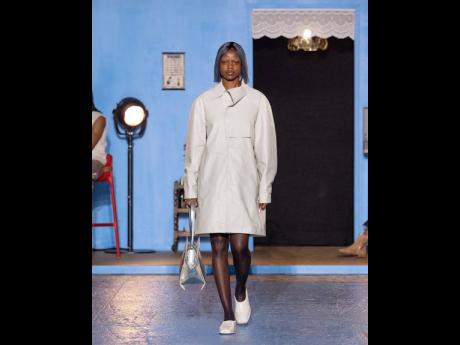 Contributed
Bianca Saunders says her inspiration for ‘Playwork’ came from seeing one of Oliver Samuels’ plays in London. 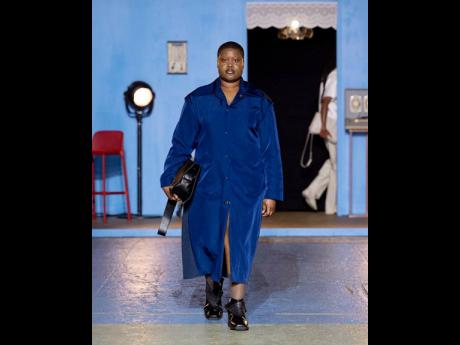 Contributed
This season also features a sophomore capsule of pieces from Bianca’s partnership with leather experts Ecco, seen in the tent-shaped handbags and other areas. 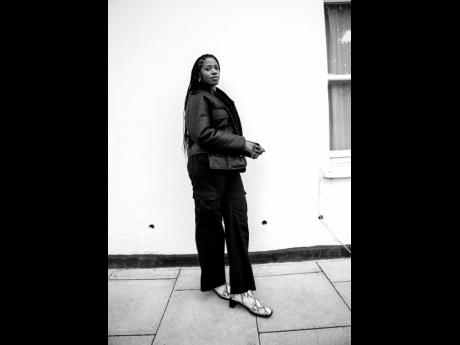 Adama Jalloh
Jamaican-blooded designer Bianca Saunders is part of an exclusive group of female menswear designers in the luxury category. 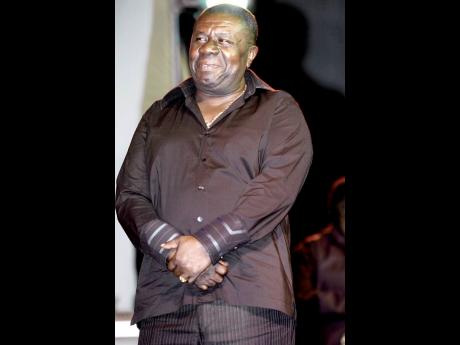 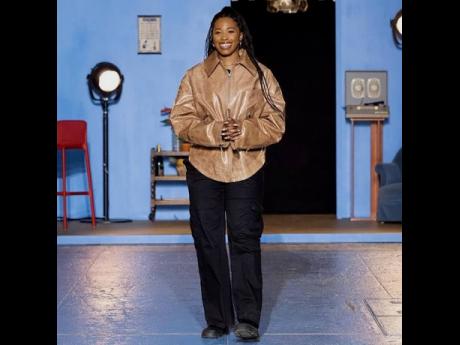 British-Jamaican menswear designer Bianca Saunders is making major waves in the sea of fashion, while continuously honing in on aspects of her Jamaican heritage as inspiration. Her Autumn/Winter 2023 collection ‘Playwork’, recently shown at Paris Fashion Week (PFW), was inspired by Jamaican comedian Oliver Samuels’ ‘90s hit show Oliver at Large. Oui, Oliver made it to ‘Paree’.

Twenty-four hours after a seemingly successful show attended by RnB crooner Usher, to say that Saunders’ life is busy would be an understatement, yet she has graciously carved out time to speak with The Sunday Gleaner. Standing in her Parisian hotel room with braids swept into a bun, her high cheekbones rival those of the models strutting on the runway. She oozes effortless chic while donning a killer silver layered chain with a simple black marina.

With a hairdressing mum from Kingston and a father who was a carpenter from St Mary, the South East London 29-year-old says she always wanted to be a designer and is grateful that her parents always supported and encouraged her craft.

Determined to explore her creative side and change things in the industry, she was encouraged to undertake menswear by a tutor at school, where she says, once she attempted it, she quickly realised that it was her calling.

Now she is part of an exclusive group of female menswear designers in the luxury context, including Grace Wales Bonner, Martine Rose (both with Jamaican roots), and Emily Adams Bode.

The Rock also inspired her previous collections, Autumn/Winter 2020’s ‘Videolight’ and Spring/Summer 2023’s ‘Hard Food’. Being born in the UK, Saunders is asked why it is important to showcase Jamaica through fashion. “My main cultural background is Jamaican. Every time I’ve been back to Jamaica, it feels so much like home, and I think it is important for it not only to be shown in a musical context but also in fashion,” she says. “Also, in Paris. I feel like that’s a big deal and feel like people should want to understand my stories and want to research the inspiration if they don’t readily know what it is about.”

She shifts her gaze and, with a smile, says, “To be fair, everyone loves Jamaican culture anyway.” True, but she continues to successfully merge the culture into her passion for fashion in original ways. Humbly she says, “It’s just a nice way of conceptualising the story into the fashion context.”

Having created a stellar reputation for immaculate tailoring, Saunders’ ‘Playwork’ presentation set was reminiscent of an Oliver at Large scene. At the same time, she upped the style ante with playful nuances and abstracted stills from Oliver at Large on sweaters, tees and track pants.

Saunders says her inspiration came from seeing one of Samuels’ plays in London and knowing that her significant other’s mother, Lovena Brown, used to act in Oliver at Large, she reached out to the comedic icon to ask his permission to use him as her muse.

Speaking to The Sunday Gleaner, Samuels, while admitting he hasn’t seen the collection just yet, was elated to have inspired it. “I am so proud of her,” he said and, without skipping a comedic beat, added, “I should be talking in Français.”

Samuels said, “I am always very willing to give young people an opportunity to express themselves, especially when it is in a positive light, and she sought me out over a year ago and asked, and I didn’t even think it was serious.” Saunders was very serious and has delivered. “Wow. Mi God!” said Samuels.

The ackee and salt fish-loving Saunders, who counts the late Vivienne Westwood as one of her fashion designer inspirations, says she hasn’t been back to Jamaica since 2017 and misses it, especially Ocho Rios. She would love to visit soon, but the fashion world calls, and she cannot deny she is loving it.

“I enjoy my job so much,” she says, and I can tell she means it. She’s living in her purpose. “This morning, I woke up and was like, ‘Wow, I actually am living my dream.’ So I’m just trying to take it in as much as I can because I don’t want to miss the moment. And I want a long-lasting career in this.”

Her hopes for the future? “For the brand to keep growing and becoming a worldwide name, and to continue to inspire the younger generation of people.”

You got this, Bianca.