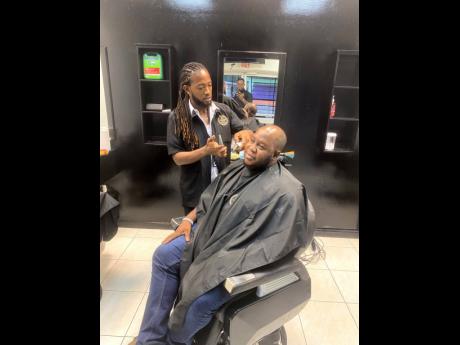 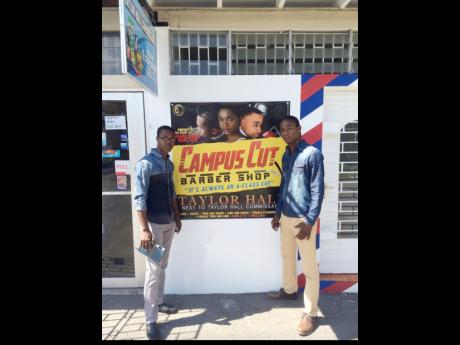 Contributed
The Dewar brothers, Terron (left) and the late O-Jay, posing proudly by their first barbershop on Taylor Hall on the UWI Mona campus. 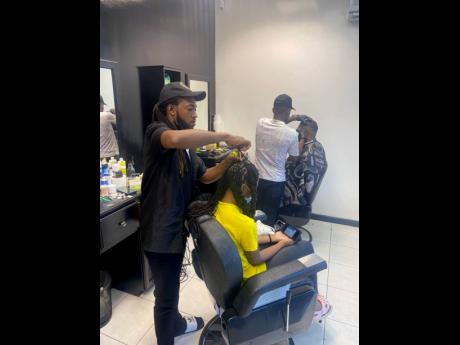 Contributed
The Campus Cuts’ portfolio has expanded to accommodate salon services as well. 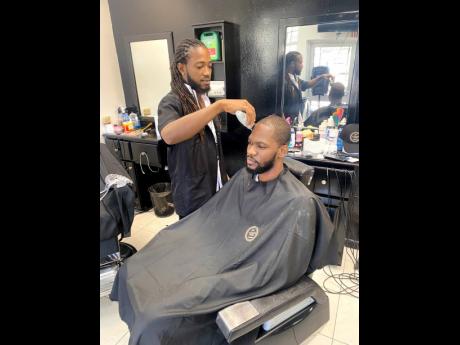 Contributed
The economics man, Etel Williams, steps into the chair for a cutting edge ‘Campus Cut’. 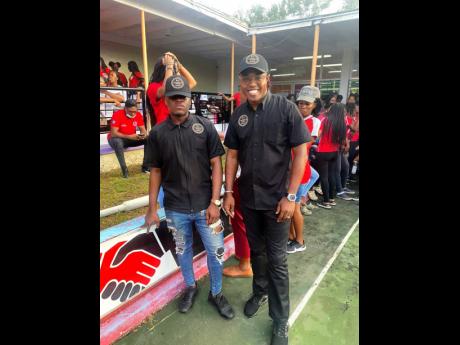 Contributed
Terron Dewar (right) shares lens time with one of his barbers on staff, Swahil Hinds. He prides himself on providing a family environment and he’s happy to assist them in reaching their financial goals.
1
2
3
4
5

It’s always impossible until it’s done. Two young brothers, hailing from Westmoreland, packed up their dreams and took to Kingston in pursuit of education, independence, and financial freedom. What started as grooming services in the bathroom of Taylor Hall at The University of the West Indies (UWI), Mona campus, quickly grew to five cutting-edge barber shops and salons across two campuses, UWI and the University of Technology Jamaica. Today, Terron Dewar shares the journey behind the shear and talks about his hope to carry on his brother O-Jay’s legacy.

“It started as a way to supplement ourselves. O-Jay was the talent behind the business. I dealt with the managing and the marketing aspect,” Dewar told The Sunday Gleaner. A year older than his brother, he knew that there were limited opportunities in their home parish. When he received the opportunity to go to university, Dewar jumped at the chance for a better life. This unfortunately meant leaving his brother behind. But he would not be forgotten.

“He started to work and together, we opened a plyboard barber shop in White Hall, Negril. I was actually my brother’s first paying customer and we framed that hundred dollar bill and put it in the shop,” he revealed. Young Dewar was 18 at the time.

Starting his tertiary journey on a student loan, the scholar was pursuing a double major in political science and public sector management, “Coming from humble beginnings, we always knew that tertiary education was the way out.”

His brother was in a motor cycle accident while he was in his second year, breaking both of his hands. This propelled him to take action, “I needed to take him out of the streets,” he said, adding his return to Westmoreland was geared toward getting his brother and taking him back to Kingston. “His hands weren’t healed yet. So I took an axe blade that I purchased from a hardware store and cut the casts off his hand,” he remarked. Determined to keep his younger brother safe, the two went to the island’s capital in 2010, so that O-Jay could go to school.

But there was one issue. His brother didn’t have the matriculation requirements to go straight to university. So Dewar enrolled him in Pre-University. “And he squatted with me on Taylor Hall,” he confessed candidly. They didn’t come from fortunate families, ambitious he notes, but not fortunate. So, to supplement themselves, they had to figure out a way they could earn an income. Dewar would take up odd student jobs around campus, but it just so happens that the other Dewar brother could trim. That would be their ticket towards the freedom ‘jackpot’.

“They had cut down a tree on campus after one of the storms, and there was a tree stump left there. So he started to trim on a tree stump in the bathroom,” he highlighted. That is how they started. Dewar further explained that his brother was such a good barber that the demand grew. This service went on to provide them with much-needed support.

Over time, however, they found themselves outgrowing the stump and the stall. It was there that Dewar devised a plan in securing a location on campus. In 2014, the Dewar brothers opened their very own barber shop, Campus Cuts, on Taylor Hall. The first year proved to be the most difficult. By this time, both O-Jay and Terron were attending university and had hall fees to consider. For both semesters, they brought it down to the wire, but managed to pay in the nick of time.

Two years after their grand opening, they expanded to UTech, creating a new shop by the barn. Every two years, they added a new location to their shop portfolio. Currently, there are five locations between the two campuses: three on UWI, and two on UTech.

The journey was fulfilling and rewarding. They were able to hire staff. O-Jay trained the barbers from one location to another, ensuring that the Campus Cuts standard was maintained. And Terron handled managing employees, some of whom were seniors, all the while building a family environment for the team. Everything was going so well until Dewar got a call in May of 2019 that would change his life forever.

“He met in a bike accident. I got the call at 3 a.m., went to the scene, and saw him on the ground.” This tragedy took a toll on him. While trying to wrap his head around the personal loss and trying to analyse how he would go on business-wise without the natural barbering element, he was presented with the doom and gloom of COVID-19.

The battle was on to keep his doors open (especially with online classes), his staff in good spirits, and maintain his own mental health during the ordeal.

Now that schools have returned to normal, he hopes to expand beyond the campus and provide customers with cutting-edge trims. As he recently rebranded and opened a new location at the Students Union on the Mona campus. He hopes to continue honouring his brother’s legacy.

“We have added two locations since his passing and this was something we discussed before,” he said, “We want to continue to seek meaningful opportunities for expansion, outside within the general space. Secondly, we want to continue to create employment, giving jobs to university students so that they can sustain themselves and getting our staff to think beyond the shear and set out to achieve financial goals. The third objective is to build a strong business that delivers high-quality service that is in pure honour of my brother’s legacy.”