‘Farm Chicks with Debbie and Becky’ has superior motives 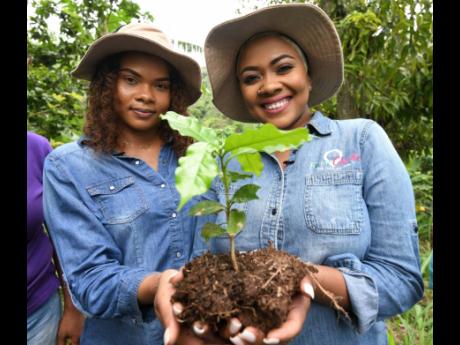 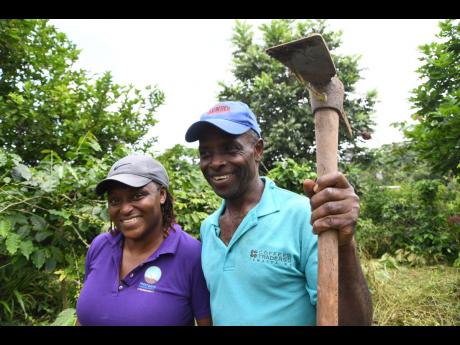 Rudolph Brown/Photographer
Husband and wife duo, Patricia and Derrick Fender, own a coffee farm in Freetown district, Woodford, in the hills of St Andrew. 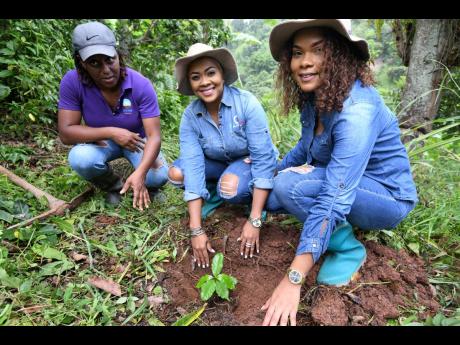 Rudolph Brown/Photographer
With the help of Patricia Fender (left), Debbie Bissoon (centre), and her sister, Rebecca Bissoon, get their hands dirty planting a coffee seedling. 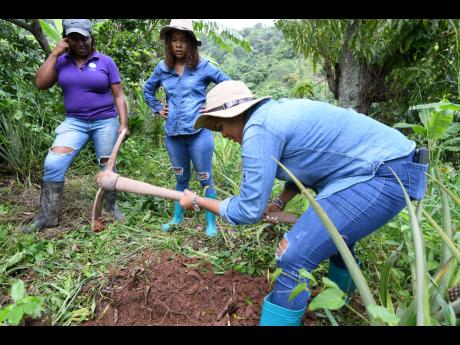 Rudolph Brown/Photographer
Debbie Bissoon digs the hole for the coffee seedling using a pickaxe, while Patricia Fender and Rebecca Bissoon look on.
1
2
3
4

Popular media personality Debbie Bissoon and her songstress sister, Rebecca ‘Becky’ Bissoon, have joined Jamaica’s growing YouTube vlogging community. But while a large number of YouTubers focus on their daily lives, the dynamic sister duo has chosen to put Jamaica’s agricultural community under the spotlight. Through their new series, Farm Chicks, Debbie and Becky Bissoon have been scouring every nook and cranny of Jamaica in search of their next farm adventure. And, while the thrills of their outdoor adventures have no doubt been exciting, the Bissoons are hoping to do so much more than nurture their ‘green thumb’. They are looking to shed light on some of the most important people in the agricultural industry – farmers.

Debbie and Becky Bissoon grew up in the rural parish of Clarendon, where they were introduced to the farm-to-table culture. Having experienced, from very early, the kind of work it took to grow fresh produce and nurture livestock, the sisters developed a deep sense of appreciation for the behind-the-scenes work farmers put in daily, and wanted to share that with the world. “We have had the idea now for three years what we want more than anything else is to shed light on the farmers; the men and women who have to get up every single day – early morning, late night. We want to highlight their struggles, the highs, the lows because dem really underappreciated, and to me, they are our biggest heroes cuz food affi eat,” said Debbie Bissoon. She said they are visiting the farms, not just to get involved, but to hear the stories of the farmers. “So we will visit the farms to hear these stories and to find out from farmers what their experience has been like in the industry and to also get our hands down and dirty,” Debbie Bissoon said.

Speaking of getting their hands dirty, the sisters took The Sunday Gleaner on their farm adventure this week. The team got to see the Bissoons work on a coffee farm owned by husband and wife duo, Patricia and Derrick Fender in Freetown district, Woodford, in the hills of St Andrew. While planting a coffee seedling, the pair told us that the show’s title was chosen in a bid to highlight that farming is no longer a man’s job. They said that even with a full face of make-up and perfectly manicured nails, a ‘chick’ is perfectly capable of getting the job done. “I had some really bad experiences in school with farming. I never liked agri (agricultural science). To be honest, it was not my thing,” Becky Bissoon admitted. “But for me, now, it is like I am developing a love for farming and an understanding that I don’t need to think that I have to be dirty or look raggedy to go on a farm. I can do my hair, put on my make-up, have my nails done same way, and den go wash off mi hands after mi done work. So this is opening up an avenue for us to feel feminine and beautiful while we do the dirty work as well,” she said.

The sisters revealed that since they aired their first episode at the beginning of May, they have had glowing testimonials from persons who have been inspired to start farming. And they are especially pleased that the show has gained young female fans. “For us, we want young people, people like us, to be able to do farming and understand that it is possible. That is the endgame really — to have more young people and more women going out there and doing it (farming) because people think say farm work is just for males. No! Woman can do it too,” Becky Bissoon said.

But other than being a source of motivation for young people, particularly women, the siblings are hoping that Farm Chicks with Debbie and Becky will open up markets for local farmers. They expressed that having gained inside knowledge of the day-to-day struggles of farmers over their six-week islandwide trek, they’ve realised that farmers need additional avenues of export for their produce. They are hoping the show gains additional sponsorship and the eyes it needs to open international gateways for Jamaican farmers.

“We want to expand because this is still an industry that needs a lot of investment. We have certain farmers who are still looking for a market for their produce and can’t find any, and you have companies here who are importing things to make products that they can actually get here,” Debbie said. “I must commend the Digicel Foundation because when we just started the Farm Chicks page on IG and started putting up pictures, they were the ones who reached out to us first and said, ‘We don’t know what this is, but it looks interesting, and it’s about farming, so we want to come on board’. Volkswagen came on board, we now have H&L Agro, and we are hoping to bring more eyes to the show because we need more support,” she said.