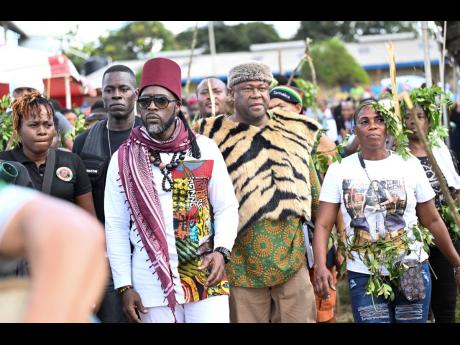 Relations between the Government and the western Jamaica quasi-ethnic group soured amid assertions of Maroon sovereignty that drew the prime minister's ire.

That policy position, imposed in December 2021, is still in effect, Minister of Culture Olivia Grange confirmed on Monday.

Grange contends that the Government enjoys good relations with the Maroons but acknowledged that “specific issues which have been raised in recent times by one leader of a Maroon community will be appropriately resolved”.

“While this policy was articulated in light of specific circumstances, it would always have been the case that the Government would not recognise a state within a state, and therefore a change in that position is not foreseen,” the minister said.

The Government had issued a directive to ministries, departments, and agencies instructing them to not engage with, or fund, secessionist Maroons who have asserted sovereignty.

But the Opposition has called for the policy to be repealed and that there be rapprochement after more than a year of withdrawal.

Categorising the decision as short-sighted and petty, Golding urged the second-term Government to reconsider its stance.

“They feel that they are being victimised by the fact that the Government won't even meet with them to have a discussion,” the opposition leader said in a Gleaner interview.

“They are not breaking the law, they are trying to build a stronger community, a better community. They have plans for the future to empower and enrich their residents and they have a strong cultural heritage, and its economic potential is vast.”

Golding also shared his support of the Maroons' right to “protect the ecological assets that are their inheritance”.

Since his election as leader of the Accompong Maroons almost two years ago, Currie has emphasised that Accompong is a sovereign territory and that it owns the mineral-rich Cockpit Country where the settlement is located.

That rhetoric has bred strife with the Government.

Holness, in a January 22 press conference, rejected the Maroon leader's claim of sovereignty, hinting that such promulgations could sow the seeds that give birth to guerrilla movements that undermine democracy.

Tensions have escalated since Currie sought an order from the Supreme Court to declare the Maroons' ownership of lands in the Cockpit Country.

The Government has since filed an application to have the case thrown out.

At the same time, an almost $1-billion project to conserve biodiversity and reduce land degradation in the Cockpit Country was shelved in late 2021.

The status of the project remains unclear as efforts by The Gleaner to get comment from the Planning Institute of Jamaica, one of the implementing agencies, have been unsuccessful.

Meanwhile, Mugabe Kilimanjaro, councillor for the Ipswich division in St Elizabeth, has joined the opposition leader's call for the “ridiculous” policy to be revisited.

“It would give the impression that the prime minister was on an ego trip, because I don't know of any circumstance or law in Jamaica that would give a prime minister the authority … that would deprive any citizen of Jamaica any government assistance that is rightfully due to them. Despite how the Maroon may view themselves, the laws of Jamaica view the Maroons in a different light,” he told The Gleaner.

Kilimanjaro cited as evidence of the non-engagement policy his request for assistance from the St Elizabeth Municipal Corporation to host the annual Maroon festival in Accompong. He claimed that the appeal was denied.

“The mayor and the chairman for the committee indicated that they had written to the minister to get some verification whether or not the council was able to use government resources to assist the Maroons, and they haven't received a response as yet, and as such they are going to abide by the declaration that was made by the prime minister,” the councillor said.

However, chief executive officer of the St Elizabeth Municipal Corporation, Errol Lebert, said the organisation received a request for trucked potable water for the festival and that 5,000 gallons was approved and delivered to Accompong on January 5, a day before the event.

Addressing the festival commemorating the 285th anniversary of the signing of the peace treaty between the Maroons and the British, Currie expressed hope that the community's relationship with the Government would be mended “very quickly”.

“Time is going, and the fact of the matter is the Maroons are not gonna wait. We know who we are, we know what we possess. It cannot be alienated, it cannot be taken away,” he said.

Editor's note: This story was updated to reflect that the request for assistance from the St Elizabeth Municipal Corporation was made by Councillor Mugabe Kilimanjaro, not Mark Golding. We apologise for the error.