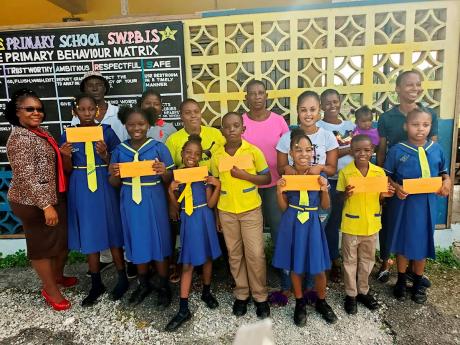 Anastasia Cunningham
Students of the Effortville Primary School in Clarendon, who were last week awarded scholarships for outstanding academic performance. 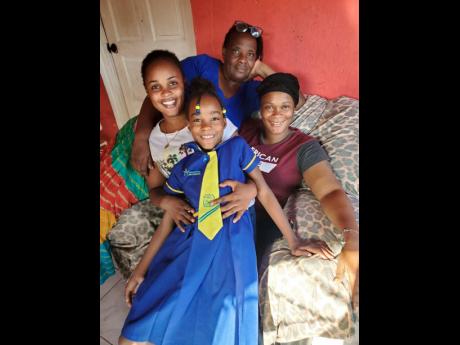 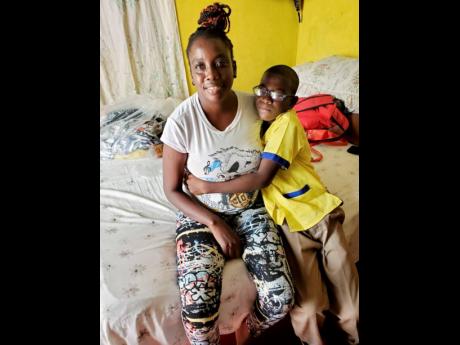 At eight years old, Dae-Jhuana Sewell and her sister, Davianna, five, have endured more gun violence than most adults. Already, they have survived a gang invasion, stepped over dead men in their own home, and continue to relive those frightening...

At eight years old, Dae-Jhuana Sewell and her sister, Davianna, five, have endured more gun violence than most adults. Already, they have survived a gang invasion, stepped over dead men in their own home, and continue to relive those frightening memories nightly.

Their home is in ‘Farm’, a section of Effortville in Clarendon, one of the seven parishes in which 14-day states of emergency (SOEs) will end this week.

Up to late Friday, no murders had been recorded in the parish since the SOE was declared, but sleuths noted, however, that at any time, “anything can happen”.

Young Dae-Jhuana is among seven students of the Effortville Primary School, who were last week awarded scholarships for outstanding academic performance. Another of the top performers was five-grade student Alrick Scott, also of Effortville.

Despite the routine gunfire and the images of gunmen firing indiscriminately in the community, they continue to impress their parents, members of their community and teachers with their academic prowess.

All were awarded between $120,000 and $280,000 by the James and Friends Foundation, a charity initiative through which dozens within the parish’s business community have donated to children. The foundation sends more than 200 children from Clarendon’s toughest communities to school each day.

Last week, Effortville Primary Principal Lisa Holmes-Shirley welcomed the awards for the students, adding that it helps to instil the sense of respect and worth she has been aiming at for pupils. This is despite the wheels of crime around them that goes “round and round” in the area, she explained.

“I have children, and at the end of the day, these children are going to be adults with my adult children. So I have to view the place as anywhere else,” argued Holmes-Shirley. “We could be smack in the middle of Norbrook ... (sure) we would get more parental support, but we are smack in Effortville ... but I’m going to treat them the same.

“Nurture is beating us. The way a lot of them (children) are cultured and nurtured over the years, it is hard to break through and get them to have a mindset of ‘I am going to get out of this situation and go to university’,” she reasoned sadly, adding that social issues such as teenage pregnancy and unemployment are the main factors.

“But it has been happening; just not at the rate that we would want it. Since 2019, our children have been going to so-called better schools based on the resources at these institutions. We didn’t have any going to the schools at the bottom of the list. So it means that they are trying, and it means somebody is doing something differently,” Holmes-Shirley told The Sunday Gleaner.

‘I LEARNED HOW TO DODGE BULLETS’

The impetus to do things differently was sparked most significantly in Dae-Jhuana’s mother, Abigail Hinds, when gunmen, in August 2019, stormed a get-together for a relative who was killed after a light post fell on him. The men fired indiscriminately throughout the house, killing two of the deceased man’s close relatives.

Allegations are that Hinds’ brothers were the target, one of whom was picked up as part of the SOE by police last week. Today, the shootings have subsided but the tension prevails between rival gangs.

“I learned how to dodge bullets,” Hinds said, recalling the frightful minutes as she scurried from room to room trying to secure her daughters.

Dae-Jhuana was found first and locked away safely in a bedroom. Davianna, however, was found clutched by one family friend, protected, as gunmen pumped bullets into the man above her.

“He literally died in front of me in the bathroom, both of us eyes made four and the whole time I was holding her. Then the gunman dem just walked through the house,” she recalled, pledging a better life for her children.

Some bullet-shattered windows remain in the home, bearing testament to the horrid night.

According to the mother, counselling has helped minimally, and to this day, her children are still traumatised. Young Davianna was grazed by a bullet on her shoulder and often points to the spot as she recalls the fateful night.

“I am so proud of her (Dae-Jhuana) and I know one day she will be able to tell her story of where she is coming from and make a meaningful contribution to society. I didn’t get to go to university, but I really want that for her and her sister. She is also doing well, too, in basic school,” Hinds continued, her mother and grandmother sharing the excitement.

In the meantime, young Alrick Scott’s mother, Latoya Brown, is sickly, having suffered a stroke that has left her with limited mobility. Still, she tries to instil the best values in her son, steering him so he does not get sucked into the vortex of crime.

Scott said he loves mathematics and hopes to become a soldier. His mother is praying for him.

“As you see, I am sick, my mother is sick and it is we alone. I am very proud of him. Happy that he got the award because I am not working and I really don’t have it,” she said, singing praises to the sponsors of the programme. “I am just always trying with him. I want the best for him even though we find it hard sometimes.”

Head of the Clarendon Police Division, Senior Superintendent Carlos Russell, told The Sunday Gleaner that the SOE has been working to reduce gang rivalries in the parish. With 86 murders in the parish up to November 24, there has been no murders since early this month, he said.

“That (Farm/Effortville) is one of the areas where we usually have a lot of issues, but we have been able to monitor it and things have remained a little calm,” he said, noting that the Bucknor and York Town spaces are most concerning at the moment.

He said 21 illegal firearms have been recovered in the parish since the start of the year.