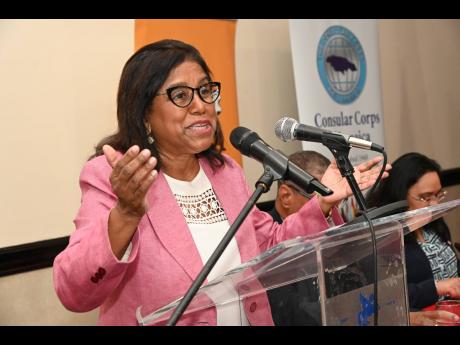 Rudolph Brown/Photographer
Paula Gopee-Scoon, minister of trade and industry of Trinidad and Tobago, addressing a Doing Business with Jamaica seminar at the Pegasus hotel Monday.

A decade after antagonism between Jamaica and Trinidad and Tobago over trade and immigration issues reached a crescendo, officials from the latter believe that the CARICOM nations are now on good terms and are trying to leverage opportunities...

A decade after antagonism between Jamaica and Trinidad and Tobago over trade and immigration issues reached a crescendo, officials from the latter believe that the CARICOM nations are now on good terms and are trying to leverage opportunities equally.

Tension between the nations swelled in 2013 when Jamaican exporters called for a boycott of Trinidadian imports into the island.

Local exporters have long complained of the trade imbalance between the countries and the difficulties they were having in accessing markets in the twin-island republic.

A trade mission comprising 16 companies from Trinidad and Tobago has highlighted the tight bond the countries now share.

Paula Gopee-Scoon, Trinidad and Tobago’s minister of trade and industry, believes that the thawing of the frosty relations resulted from the efforts by both governments, with the political leaders demonstrating positive examples of communication and strengthening ties, which business leaders emulated.

Speaking with The Gleaner on Tuesday during a reception at The Jamaica Pegasus hotel in New Kingston, Gopee-Scoon said the “people-to-people relationships have been working”.

“We have been forming relationships and dealing with the issues as they come up. It’s never going to be easy entering each other’s markets. In other words, there are always conditions to be satisfied, especially if you’re dealing with items like chemicals [or] food and beverages,” she said. “Once the standards are met, Trinidad and Tobago has no issues, and where there are impediments, we are there to attend to these, especially now with the trade mechanisms that we’ve just signed with the MOU … dealing with the barriers that may come up.”

The minister said that on the Trinidad and Tobago side, they are prepared to ensure that the barriers can be removed “to ensure that we facilitate trade in goods and services between each other’s countries”.

Gopee-Scoon believes that market penetration from both countries played a role in creating leverage.

“Market penetration is important because we are manufacturers, and Jamaica has a good base in terms of population size and tourism size as well ... . We only want to take the relationship and make it better and tighten that integration between us,” she said.

The trade imbalance between both nations has long been a source of discontentment. Jamaica imported US$188 million from Trinidad & Tobago in 2021, compared to Trinidad & Tobago’s imports of US$16.1 million, data from the International Trade Centre show.

But Jamaica’s population roughly twice the size of Trinidad and Tobago’s, Gopee-Scoon noted that the Jamaican market is quite vast.

She said there are no logistical issues between both countries, noting that Jamaica makes for an easy transfer of goods.

“And in any event, we have been doing business together for a long time now, and what we are doing on this occasion is, in fact, deepening those relations trade-wise and looking at both trade for goods and services,” she said.

On the other hand, she said both nations need to work on measurements and statistics, noting that the will is there at the highest level with Prime Ministers Andrew Holness and Dr Keith Rowley.

Dr Mahindra Ramdeen, CEO of the Trinidad and Tobago Manufacturers’ Association, reiterated that both countries have made strides in smoothing over the issues from the past.

“At the private-sector level, we have been working with the Jamaica Manufacturers [and Exporters] Association. We are a part of the regional framework, the Caribbean Manufacturers’ Association, to assist each other with trading challenges among ourselves,” he said.

Tricia Coosal, president of the Trinidad and Tobago Manufacturers’ Association, added: “I think we are very fortunate that we are part of the CARICOM, and we need to focus more on the trading relationships within CARICOM to build our economies instead of looking for extra-regional trade. We can look into ways to suffice our needs.”

She believes that can help in having low shipping costs as Jamaica and Trinidad and Tobago are in proximity to each other, which makes the exchange of goods and services cheaper and alleviates foreign-exchange issues.