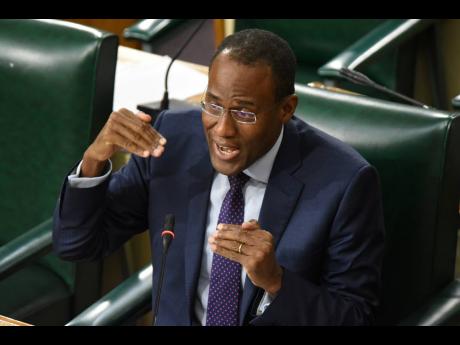 Ian Allen/Photographer
Dr Nigel Clarke, minister of finance and the public service, is animated as he responds to opposition legislators in Gordon House on Tuesday.

President of the Union of Technical, Administrative and Supervisory Personnel (UTASP), St Patrice Ennis, is pressing for answers as to whether public-sector workers will have to repay allowances they received effective April 1 this year. Those...

President of the Union of Technical, Administrative and Supervisory Personnel (UTASP), St Patrice Ennis, is pressing for answers as to whether public-sector workers will have to repay allowances they received effective April 1 this year.

Those allowances would cease under the Government’s new compensation exercise, which retroactively begins at the start of the 2022-2023 financial year.

He told The Gleaner on Wednesday that his union has not signed the Government’s Compensation Review agreement as yet because it is awaiting the full documentation of the accord.

“We are now hearing that the workers may have to pay back the government money with respect to travelling and other allowances because the effective date was April 1,” said Ennis. “... Since you have been receiving those allowances subsequent to April 1, then it means that these workers will now be liable to the Government. We need to know what exactly is happening here.”

The UTASP president said that many workers were not aware of this development.

“I understand that there are discussions now going on post-signing. It would have been prudent that all of these things be ironed out prior to signing, and those are some of the things that we have been circumspect about, and those are the things I would like to have in black and white before me before we commit ourselves,” he added.

Ennis, whose union is a member of the Jamaica Confederation of Trade Unions, said he would have further dialogue with the Government on the issue.

Opposition Spokesman on Finance Julian Robinson asked his government counterpart whether allowances that had been paid to public sector workers since April this year would have to be refunded by civil servants or subtracted from future payments.

However, Robinson sought clarity by asking the minister whether there would be a “netting off” against retroactive sums to be paid in December.

Responding, Clarke said: “The back-pay calculation is going to be based on what someone should be earning from April 1.”

The discussion took place as parliamentarians examined the First Supplementary Estimates, which was approved by the House.

St Andrew South West Member of Parliament Dr Angela Brown Burke also quizzed Clarke on the issue, saying that the minister did not answer the earlier question posed by her colleague.

The finance minister reported that unions representing about 60,000 workers in the public sector signed off on the Government’s new wage scheme. Clarke has assured that no public sector worker will be worse off than before.

He said that discussion was continuing with the Jamaica Teachers’ Association and the police, adding that if these two unions ink the agreement, that would take the tally to just under 100,000 public-sector workers.

Clarke said that public-sector workers whose unions have already signed the agreement are expected to receive their back pay in time for Christmas.

He told his parliamentary colleagues that the Government would have to table the Second Supplementary Estimates in Parliament early next month to facilitate the payments.