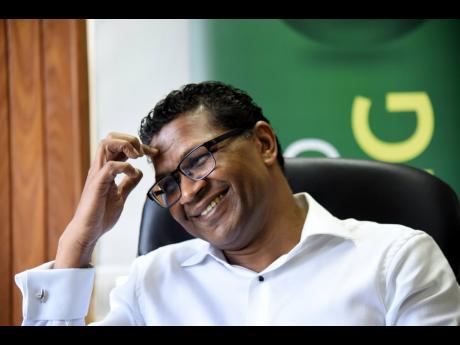 When Brazil's samba orchestra takes centre stage today at the Qatar World Cup, Jamaicans will join millions of football-crazy fans in supporting a team whose prowess and artistry have defined the beautiful game.

The South Americans, who have participated in every football World Cup since its inception in 1930, are affectionately called The Seleção and command a chunk of support in Latin America and the Caribbean and, indeed, the world.

The ensemble will take the field against the Eastern European team of Serbia at 2 p.m. Fretting fans are fearful of consecutive days of heartbreak following Argentina's loss to Saudi Arabia on Tuesday and Germany's defeat to Japan on Wednesday.

Brazil are fancied to beat Serbia, but so, too, were Argentina and Germany expected to triumph over their opponents. Among the thousands of Jamaicans cheering the Brazilians on will be Seprod Group of Companies Chief Executive Richard Pandohie.

“Huge football fan. I don't know who is gonna win the World Cup. But it's exciting. I think, like every other Jamaican, I am carrying Brazil, but I think there are some dark horses in there like Netherlands ... ,” he said in a Gleaner interview Wednesday before ruing Jamaica's absence.

Brazil have not moved beyond the quarterfinals in the last four World Cups and will seek to impress today. Superstar Neymar is leading the samba hopes with the experienced Thiago Silva and Dani Alves. Gabriel Jesus, Vinicius Junior, and Rodrygo also expected to light up the stadium.

Their first hurdle, however, is Serbia.

Aleksander Mitrovic and Dusan Vlahovic, the striker pair, will be a handful as well as Sergej Milinkovic-Savic.

“Brazil is ... in love with Jamaicans. You want to be in love with somebody who is in love with you. When I go to Brazil – and I have been there quite a few times -– and just being Jamaican, just saying you are Jamaican is a big thing. Jimmy Cliff, my God, is like a demi-god over there,” Pandohie said.

“And then Rene Simoes came as the Brazilian coach who took the first English-speaking [Caribbean] team to the World Cup. And they have a history similar to us ... .” he said, referencing both nations' slavery-era antecedents and African ancestry.

More than half of Brazil's 214 million population is of African descent.

“I relate to countries that you feel a sense of connection to. I don't feel connected to Argentina at all based on their history, but I feel a connection with Brazil. I would love the African teams to do well, but they won't. I mean it's just the reality,” said Pandohie.

While Brazil is his team, win or lose, he is backing England – largely based on sentimentality because of the participation of Jamaica-born attacking midfielder Raheem Sterling.

“So if I have to pick a team, it's UK. But my emotional team is Brazil,” Pandohie said.