Not mad at God anymore

Shot to silence him and now crippled, hit-and-run victim using ordeal to motivate others 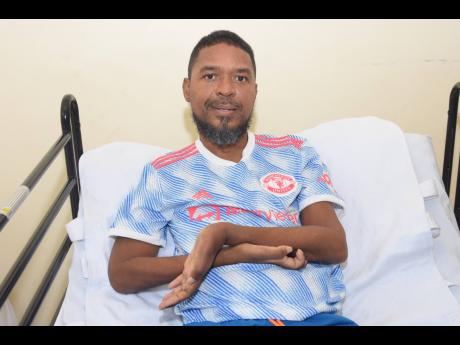 Ashley Anguin
Both of his hands are unable to grasp a cup, but Kevin Lewin’s eyes lit brightly, spirits high, as he ‘repped’ for his favourite football club, Manchester United. 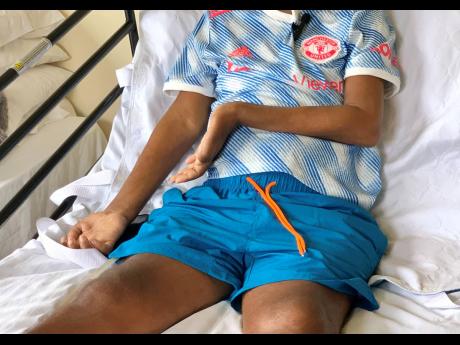 Ashley Anguin
“I am now able to sit up, but initially, I couldn’t do any of that. I’m able to move my arms as well, but not my legs as yet, but I am hopeful”: immigration officer Kevin Lewin crippled by unknown shooter.
1
2

Kevin Lewin’s shooter asked him if he could recall the licence plate of the vehicle which slammed head-on into his in a hit-and-run collision. Little did he know that the man who questioned him had come back to silence him.

Today, the immigration officer attached to the Sangster International Airport has been confined to a bed, some days a wheelchair, crippled from the neck down after being shot in the spine by one of the men who rammed his car during a break-speed accident in the popular Bogue Village area at the western end of Montego Bay, St James.

Just under two years since the incident that made national headlines, Lewin has now decided to speak about his ordeal.

When The Sunday Gleaner visited his home last week, Lewin’s feet were elevated on two pillows to assist in blood circulation and half of his body was raised on a hospital recliner.

Both of his hands are unable to grasp a cup, but his eyes lit brightly, spirits high, as he ‘repped’ for his favourite football club, Manchester United.

Recalling the November 2020 incident that has maimed him for life, the former businessman recounted, “I was just heading home on the Bogue road and saw a vehicle approaching very fast, but because it was on my side of the road, there wasn’t much that I could do. So I was just there and hoping that the vehicle would slow down, but the vehicle kept coming and we had a head-on collision.”

Thinking the other driver would stop to assess the damage, Lewin said that when he stepped out of his vehicle to approach, the other driver sped off. He gave chase, but his efforts were futile.

He stopped and waited by the roadside for about 10 minutes, with, passers-by, including the shooter, checking in on him.

“There was this particular person that came and he was asking me a few questions about the accident. And I thought it was just random, so I engaged in conversation,” he said.

“I just turned away my head for a second to plug the charger into my phone and I just felt different, like I was somewhere else, like I was floating. And I realised afterwards that I got shot.”

Before shooting him in the neck, the man asked Lewin if he saw the licence plate of the car that hit him.

He believes the intention was to shoot him in the head, but the shooter missed when he shifted.

“At the speed they were driving, it appeared that they were running away from something, but I couldn’t say that definitively,” Lewin speculated.

There was no blood spewing from the wound, but the bullet had penetrated his spinal cord, affecting all his limbs. He said he was like a log floating down a river with no control, as he could move none of his limbs.

“It also affected my breathing because the level at which the bullet pierced my spinal cord was high up. ... It affected a lot of things in my body. It was pretty bad. I was unable to move any at all after the incident,” he shared.

Today, he is able to move his neck, but has to wear a brace, so sleeping is extremely difficult.

The 45-year-old, who had a bright future before the tragedy, said although his nine-to-five job was as an immigration officer, he was an entrepreneur, operating an Airbnb, and had just added shipping small packages on his list.

“I was a venture capitalist. Anything that I thought was profitable, I would dabble in it,” he told The Sunday Gleaner.

But his life took a 180-degree turn – from outgoing and adventurous to debilitating.

“It is overwhelming to know that I’m not able to do the things I love doing, like just being about and working on some project. That’s the difficult part of the journey, not being able to move about as I normally would,” he shared.

Although his fingers are showing signs of progress, he still requires 24-hour nursing assistance because he is unable to do anything for himself, “even basic stuff like feeding myself, brushing my teeth”.

“I am now able to sit up, but initially, I couldn’t do any of that. I’m able to move my arms as well, but not my legs as yet, but I am hopeful,” he said.

That hope was what led Lewin to start a YouTube channel #Stimul8 TV, aimed at motivating others. Barely a month on the platform and subscription has gone over 660, with over 2,800 views of his story.

That hope stems from the fact that practically everyone, including the doctors, felt it was highly unlikely he would have survive, especially during the first two days after the near-death experience when he went into respiratory distress. He was told he needed to be on a ventilator and plans were being made to airlift him overseas.

Today, Lewin praises the doctors and nurses at the Cornwall Regional Hospital, who he said did a pretty good job. He also spent days in intensive care at a private hospital, before being transferred to the Tony Thwaites Wing at the University Hospital of the West Indies, where he spent a month.

He also did therapy at the Sir John Golding Rehabilitation Centre for a month, but was readmitted to hospital in April 2021 for three months after developing complications.

He then needed 24-hour care, so he ended up in a nursing home, but Lewin said that was not for him.

A man of immense faith, who serves his God as an Adventist, Lewin told his followers on YouTube that at one time during his turmoil, he became mad with God, “but not anymore”.

“I grappled with the fact that there are so many wicked people in the world and I wasn’t deserving of what happened, but I realised that wasn’t going to get me anywhere. I am the same person; the only difference is I am immobile, but that situation will change,” he constantly reminds himself.

Lewin’s massive network of caring family members, friends, and co-workers have brought him this far. So far, that he has been able to forgive whoever tried to kill him.

In fact, he doesn’t think about his attackers any more.

The police are yet to make a breakthrough in the case, and it has been months since he has heard from them.

“You know, sometimes, after a while, people tend to forget about what happened. In the beginning, you know, everybody’s crossing their ‘t’s and dotting their ‘i’s, but afterwards, it kind of dwindles down. I don’t wish to go back there, so I don’t think about that. I’m just focused on myself now and moving forward, on what I can accomplish. I’m not thinking about the past,” he said.

“Getting there is a cumulative effort. I can’t say that there was a moment where I felt like I never had the type of support that I needed. Everyone played a part, especially family. I don’t think I probably would have been here if I didn’t have that kind of support from everyone,” he shared.

Speaking about his situation, he said, allows him to connect to people, particularly persons who may be going through something similar. He wants to be a motivational voice for those people who might feel down or feel like the world is coming to an end because of their situation.