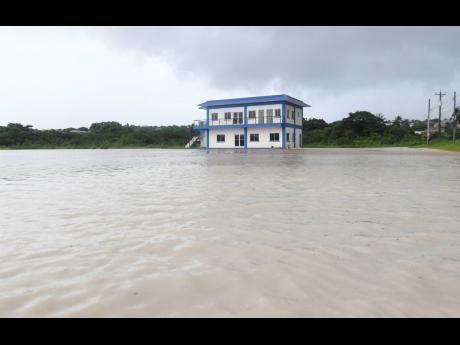 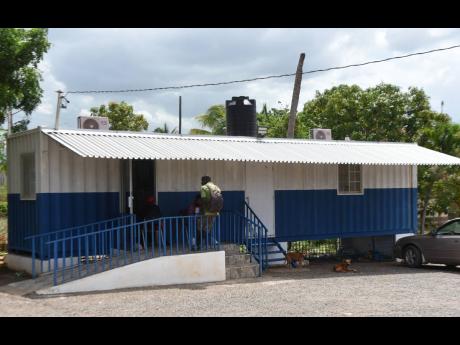 While the relevant authorities mull over their next steps, Green Acres residents and cops have to make do with a 20-foot container that was retrofitted for a police post, which has been in use since March 2018.
1
2

Seeing their police station immersed in several feet of water as a result of Tropical Storm Ian last week was not what the residents of Green Acres in St Catherine had in mind when they petitioned for it. Now they are even more distressed at the...

Seeing their police station immersed in several feet of water as a result of Tropical Storm Ian last week was not what the residents of Green Acres in St Catherine had in mind when they petitioned for it.

Now they are even more distressed at the millions of dollars potentially wasted and an unresolved crime problem.

A spike in brazen home burglaries, robberies and other crimes, compounded by the fact that the closest police station was miles away in the Old Capital of Spanish Town, had convinced them that they needed their own police station.

“We are plagued by a lot of petty crimes, burglaries, that kind of thing,” said Kamau Kambui, a former president of the Green Acres Citizens Association.

So, with 10 acres of land set aside for recreational purposes in the original development order, Kambui said residents, through the association, in 2018, approached St Catherine West Central Member of Parliament Dr Christopher Tufton with the idea of getting their own police station.

Shortly after, he said, a technical team from the Ministry of National Security was in the community scouting sites proposed by the citizens.

But it has been plagued with problems.

Scheduled for completion in June 2020, it was pushed back to last year. But the planned June 2021 opening had to be delayed until drainage woes plaguing the low-lying St Catherine community were remedied.

At the time, it was disclosed that it would cost the Government $260 million to solve the problem.

Just over a year later, the facility was again in the public glare after this newspaper captured images of the two-storey structure under flood waters last week.

Concerned that the police station would now become a white elephant, on Friday, residents told The Sunday Gleaner that it was a known fact that the land, which was once a football field, has a history of flooding when there is significant rainfall.

Despite this, the construction of the Green Acres Police Station was given the green light by three state agencies, including the country’s environment regulatory authority, multiple sources have revealed.

According to Kambui, a trained architect, the location was selected by the technical team from the national security ministry who were informed at the time of the recurring problem of flooding in the area.

But he said after the site selection, there was no more consultation with the community.

“You have gone through a design process. Certainly, the next step is to have some community consultation before you go into engaging a contractor and start construction. We heard nothing from them after that,” he charged.

A building plan submitted to the local authority, the St Catherine Municipal Corporation, had approvals from the National Environment and Planning Agency (NEPA), the National Works Agency (NWA) and the Public Health Department, according to insiders who spoke to The Sunday Gleaner.

The municipal corporation is required to give final approval for the building.

According to one insider, the municipal corporation gave conditional approval for the building plan, mainly because it included an expansive drainage system, which the NWA said would mitigate the flooding concerns of residents.

“That was the basis on which the [conditional] approval was given,” said the insider, who did not want to be named.

Spanish Town Mayor Norman Scott, who is also chairman of the St Catherine Municipal Corporation, declined to comment on the approval process.

On Friday, Peter Knight, executive director of NEPA, requested that The Sunday Gleaner submit questions about the project via email.

There was no response up to press time last night.

Tufton acknowledged that the flooding concerns are well known, but said the issue of the drainage in the area is “bigger than just a decision to build the police station at that location”.

“Rather, it’s an issue that affects the community in terms of access,” said Tufton, who is also the health and wellness minister.

“This normally happens a few times each year and would not just affect the land where the new building is located, but also the roadway, a major thoroughfare for citizens in the area,” he told The Sunday Gleaner.

His political opponent Kenyama Brown is not opposed to a new police station for residents of Green Acres, but said the project could have been handled better.

“We at least need to take the necessary steps to ensure that taxpayers’ money does not seem to be wasted. The citizens deserve better,” Brown said.

While the relevant authorities mull over their next steps, Green Acres residents and cops have to make do with a 20-foot container that was retrofitted for a police post.

The cramped space, which has been in use since March 2018, is very inadequate and provides very little privacy for cops and victims of crime who show up there to file reports, residents complain.