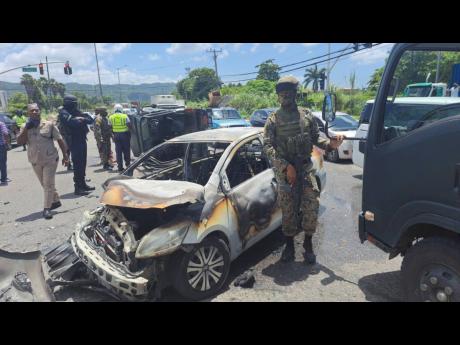 Photo by Hopeton Bucknor
Members of the Jamaica Defence Force (JDF), the St James Police’s Traffic Department and the Jamaica Fire Brigade at the scene of a three-vehicle smash-up in Westgreen, Montego Bay, St James, on Friday. Two soldiers and a male civilian motorist were injured in the accident.

Two Jamaica Defence Force (JDF) officers are among three persons who were seriously injured in a three-vehicle accident in Montego Bay, St James, on Friday.

Reports by the Freeport police are that about noon, the soldiers were travelling in a service vehicle behind a police unit, heading from the Bogue area and towards Westgate.

As the security personnel, who were travelling with sirens on, were driving through the traffic lights at the Westgreen intersection, a Delta motor car travelling from Westgreen entered the roadway and collided with the JDF vehicle and a Toyota Fielder motor car.

The impact resulted in the JDF vehicle overturning, and the Delta motor car immediately burst into flames.

The driver of the Delta motor car was rescued by other motorists, who smashed his windscreen and pull him free from the burning vehicle, but not before he sustained burns to his body.

He, along with the two injured soldiers, was rushed to the Cornwall Regional Hospital for medical attention.

The driver of the third vehicle escaped unhurt.

One unit from the Montego Bay Fire Department extinguished the blaze but the car was completed destroyed.

The crash resulted in a major traffic jam spanning several miles in the western end of the Second City.