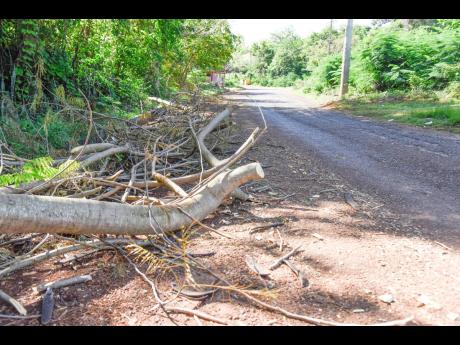 Nicholas Nunes/Photographer
Branches left at a section of Victoria Town Road in Manchester which was blocked by residents on May 10.

Jamaica’s Forestry Department CEO Ainsley Henry has cautioned against the growing practice of tree-chopping by protesters, classifying the troubling incidence as “wanton destruction”.

Not only are demonstrators hauling on to thoroughfares old cars and refrigerators, they have been toppling whole trees or cutting large branches as barricades in Cavaliers, St Andrew; Bethel Town to Darliston, Westmoreland; and Hamilton Mountain, St Mary, to press their demands for better roads.

Henry, the conservator of forests, says the value and functions of trees ought not be overlooked.

Henry said that the Forestry Department, which manages and conserves Jamaica’s public forest resources, is not empowered to charge offenders for cutting down trees outside of established forest reserves. That role rests with the National Environment and Planning Agency.

“Even there, there is a threshold in terms of the area that is being cleared, so, unfortunately, there is no protection for individual trees in that context, generally speaking,” he said.

Sustainable development is one of the philosophical planks of the Forestry Department, and Henry wants to put an end to practices that destabilise the environment.

“The fact is that we have seen a lot more intense rainfall and things of that nature, so cutting down trees along the roadway, exposing soil, the earth, to those kinds of impact can result in a cascading slope failure as well,” he said.

“Naturally, we are also very concerned about cutting down significant trees that have been there for years and, in some instances, have cultural or even social significance.”

Spearheaded by the Forestry Department, the Government has targeted the planting of three million trees in three years. The initiative, which was launched in 2019, ends this year.

The drive would have been hampered by the coronavirus pandemic, which triggered a slew of laws restricting movement.

“We are over a million, but we are cataloguing, ... so we don’t have a fixed number,” Henry said.

The department’s latest report on forest cover was issued in 2013. Evaluations are done every 10 years.