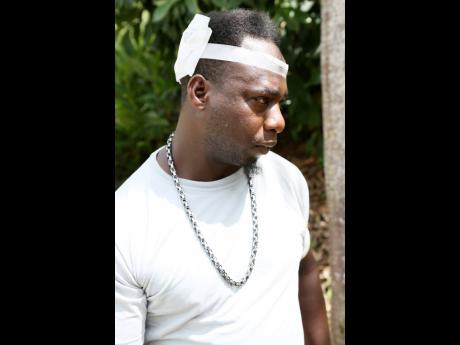 Nathaniel Stewart/Photographer
A glum-faced but thankful Christopher McKay recounts blacking out after he was struck by a motorcycle while he volunteered on a kerbside Labour Day project on Monday.

Christopher McKay of Rhodes Hall in Kellits, Clarendon, is thanking God after surviving a motorcycle crash on Monday while he was volunteering.

McKay, who was knocked down by a bike Monday morning as he painted a kerb, said he lost consciousness upon impact.

“I don’t know what happened. I just know when I awoke, I was across the road,” he said in a Gleaner interview. The volunteer was taken to a doctor and issued with medication. He also underwent tests.

He sustained injuries to his shoulder, buttocks, and head.

Despite his misfortune, McKay is still enthusiastic about volunteerism, saying he has no reservations about kerbside paint jobs.

“That is my work as usual,” he quipped.

The motorcyclist who struck him is reportedly well and the two have spoken and “work things out”.

“I could have died and passed away and I don’t know nothing,” McKay said.

“I am thankful to be alive,” are his grateful words.

Noel Nembhard, councillor for the Kellits division, said the incident underscored the need for motorists to exercise greater care. While lamenting scores of lives already lost in road crashes, Nembhard said he was grateful that McKay had survived.

“I was so shaken up when I discovered what happened. ... To know that he was engaged in the community spirit of volunteerism and could have lost his life in the effort,” he said.

Nembhard said that his team will be following up with McKay to ensure there are no lingering health effects from the crash.

“We have, however, not received a formal report,” Guscott told The Gleaner.

As at last Friday, 178 persons were killed in traffic crashes.