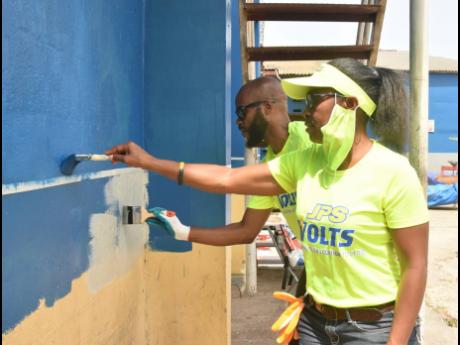 While the St James Municipal Corporation (StJMC) has embarked on a $5-million upgrade for the main market district in Montego Bay, vendors are hoping problem areas will be addressed at the completion of the two-week exercise to mark Labour Day.

The Fustic Road-based Charles Gordon Market was selected as this year’s St James parish project, the second time in less than a decade.

“We are repainting the market. We are also going to be repainting the car park, reallocating the parking spaces, and doing a general clean-up of the market,” Saad Campbell, deputy superintendent of the roads and works at the StJMC, explained yesterday.

He told The Gleaner that $1 million was earmarked for yesterday’s activities, with another $4 million set aside for additional works.

“There are plans to erect about 80 metres of sidewalk along Fustic Road, basically to give some delineation to the area that is drivable and walkable and to ease pedestrian access for the market and market facilities,” said Campbell, adding that this should be completed over the next two weeks.

“We are going to be repaving the Gun Court area, which is the main area for vending in the market, just to make it more easily accessible and comfortable to use for both the vendors and persons purchasing their wares,” he added.

This news was a relief to Lucille Johnson, who has been selling at the market for more than 25 years, who noted that the Gun Court area has been a concern for her

“I am feeling good, for me everything is good. Right now, I don’t see anything wrong with the market more than one little place inside there (Gun Court area). When we get rainfall, a little water come down,” said Johnson.

Jennifer McNaughton was more concerned about garbage and other debris.

“I need my stall to wash out. I have been paying my [market] fee. They come in and wash and send all the dirt under my stall and that of other people beside me,” said McNaughton, who has been peddling her wares at the facility for more than three decades.

“We need the ground to fix. There are a lot of potholes there and when the rain falls, a whole heap of water just muck up underneath my stall and along the sidewalk. The market needs to be fixed,” she pleaded.

Campbell noted that the StJMC decided to focus on the market this Labour Day as it is a major income-earner for the corporation.

“It is an area that is of heavy significance to the municipal corporation. It is also one of the areas that we view as a sore point. Sometimes it gets a lot of attention based on the wrong things, so we are ensuring that it is kept in very good order,” he told The Gleaner.

“Charles Gordon Market – and the market district, I would say – is one of the most important areas within the municipality. And if we have learned anything from COVID-19 the fact is that we have to maintain a certain level of sanitation and to always maintain as best as possible cleanliness,” said Vernon. “We don’t get to do it often enough, sadly, but as often as we can and once we get the opportunity, we are going clean the market district ... because it is the catalyst of health in the municipality.”