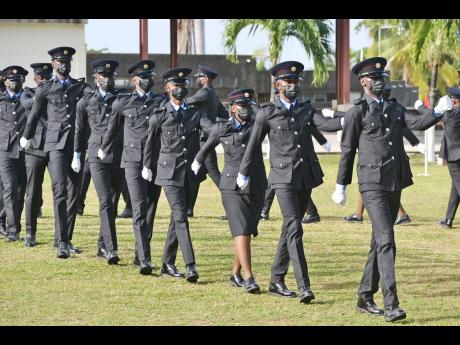 Amid a ferment of labour protests in recent weeks, Local Government Minister Desmond McKenzie and Jamaica Fire Brigade (JFB) Commissioner Stewart Beckford have signalled their commitment to improving worker welfare after firefighters staged two demonstrations of their own.

The brigade cracked down on the firemen, with at least five suspended from duty.

Speaking at a JFB graduation Saturday on the grounds of the Iona High School in Tower Isle, McKenzie, speaking via Zoom, addressed the issue briefly.

“Quite recently, there was an incident involving a member of the organisation,” McKenzie began.

“In any free and open democracy, an individual has a right of expression. I want to give the new recruits and those who are well established in the organisation the assurance that this administration of Prime Minister Andrew Holness is committed to the welfare of the men and women of the Jamaica Fire Brigade.”

The local government minister said the Government was committed to providing resources that are necessary for the firemen to perform their duties.

McKenzie pointed out that since 2016, the Government has been fulfilling its pledges, with the construction of new fire stations, provision of equipment, and ensuring that every fire station in Jamaica has at least one working truck.

The level of worker discontentment is at its highest level during the six-year rule of the Andrew Holness administration, which is seeking to chart the emergence of the economy from COVID-19’s shadows amid surging local and global inflation.

Holness used his Labour Day message to appeal to the workforce that they were the backbone of the country who “keep the wheels of our economy turning”.

He emphasised that the economy was still fragile as the administration undertook recovery.

“We know that our continued economic recovery is dependent on our people, and we are committed to preserving the hard-won rights and liberties of the Jamaican worker to include proper wages and working conditions,” Holness said.

He added: “The Government is actively pursuing ways to increase workers’ benefits. For example, we are examining the feasibility of implementing unemployment insurance in Jamaica to assist workers who become unemployed through no fault of their own.”

At Saturday’s ceremony, McKenzie urged the 83 recruits to seize the responsibility of saving lives and property.

Speaking with The Gleaner after the function, Beckford declined to comment on the possible punitive action the protesting firemen faced, advising that he would be on the disciplinary panel.

However, he said that the welfare of the firefighters was important.

“It’s a matter of the resources that we have, how can it stretch, and as a management, what we tend to do is look at the worst-case scenario and treat with that so when they come to work, they’re in an environment that is conducive to the kind of work they do,” the commissioner said.

The training of the recruits took place at the Madge Saunders Conference Centre, next to Iona High. Training lasted 13 weeks.

At the graduation ceremony, Kenneth Smith was chosen best recruit and was awarded the yellow helmet.