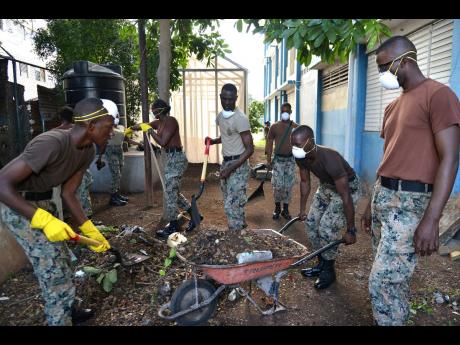 File
Members of the Jamaica National Service Corps helping to clean up the Boys’ Town Infant and Primary School in Kingston in February 2019 as part of a beautification project. 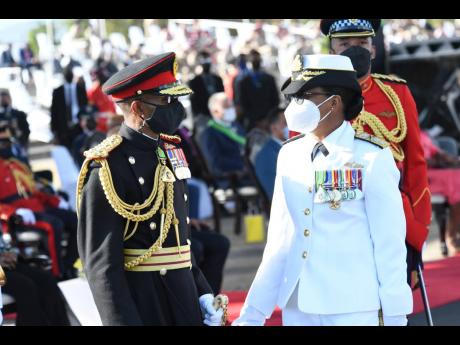 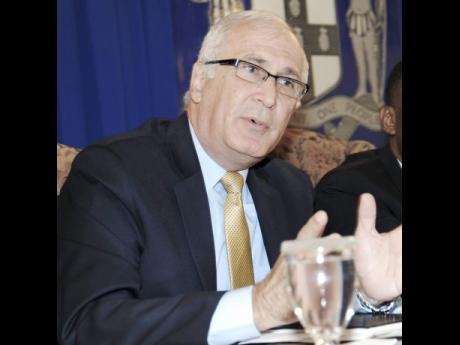 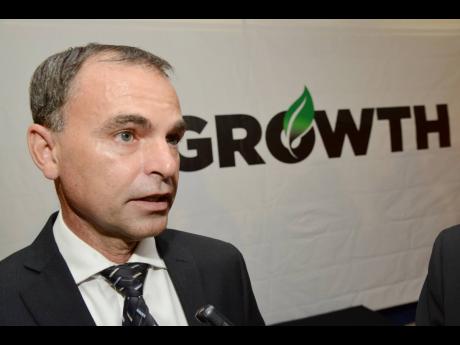 The targeted swelling of the ranks of the Jamaica Defence Force (JDF) through its Jamaica National Service Corps (JNSC) has been a lightning rod for critics adamant that it is a political tool that has diluted the quality of the army. But Rear...

The targeted swelling of the ranks of the Jamaica Defence Force (JDF) through its Jamaica National Service Corps (JNSC) has been a lightning rod for critics adamant that it is a political tool that has diluted the quality of the army. But Rear Admiral Antonette Wemyss Gorman disagrees, arguing instead that the programme was designed to and is plugging a significant human resource gap in the force.

Wemyss Gorman, who took the reins of the military on Friday during a change of command parade at the army’s Up Park Camp headquarters, disclosed during a Sunday Gleaner interview last Wednesday that a strategic defence review in 2006 triggered concerns about its manpower and how recruitments were conducted.

The JNSC, which falls under the Housing, Opportunity, Production and Employment (HOPE) Programme, was established as a third arm of the JDF to meet the 15,000 regular force and national reserve quota. Approximately 8,000 men and women make up the current force.

HOPE is the brainchild of Prime Minister Andrew Holness and is designed to target persons aged 18 to 24 deemed at risk.

The new chief of defence staff said the programme, which has added hundreds of new recruits to the army since 2017, has bolstered its ability to continue its support for internal security as daily murders continue to soar, while contributing to nation-building.

“The JNSC programme is our strategy of youth engagement ... . The long-term plan is to change the culture of violence, and if you look at the statistics, the age group of persons that are perpetrating crimes or causing violence, you really need intervention with youth and we think we have something to offer there,” said Wemyss Gorman.

More than 80 people have been murdered since the start of the year, following on the heels of 1,400 murders recorded last year.

The murder onslaughts, believed to be mainly the work of young, inner-city unattached youths, underscore turmoil for the Government which has responded with a consistent roll-out of states of emergency and zones of special operation, resulting in the regular deployment of soldiers.

That, coupled with the need for additional manpower and increased negative interactions between the military and the public, according to statistics from the Independent Commission of Investigations, has given rise to claims of a watered-down JDF that is accessible to anyone.

Retired JDF Colonel Allan Douglas told The Sunday Gleaner on Saturday that it would be “very unfortunate” if the Government or JDF accepted this notion.

“... There must be a better understanding of the JNSC concept and, more importantly, its origin. Was the JNSC a JDF-born concept, or was it a JLP (Jamaica Labour Party) Government concept thrust on the JDF for that institution to oversee its implementation and to achieve successful outcomes? And if this is so, did the JDF not appreciate the possible negative impacts on its discipline/standards?” Douglas reasoned.

“I respectfully suggest that the new JDF’s chief of defence staff provide the answers to those questions and clarify whether the JNSC is worthwhile, sustainable, and in the best interest of the JDF and, indeed, Jamaica.”

But Wemyss Gorman said those critical of the strategy do not understand how the programme works.

She said not everyone who enlists in the programme transitions to the regular force.

“Those persons who don’t meet the requirement and don’t transition, we have given them tools to become better citizens ... . There’s going to be a point when the JDF meets its quota of where we want to be with our establishment,” she said, adding that the programme will continue but to largely offer skills training.

“We want to engage 20,000 and the JNSC programme is our contribution to nation-building to say, take these guys off the streets, give them some skills, socialise them a little better and allow them to be better citizens so that we are not chasing them,” she insisted.

Colonel Martin Rickman, who spearheaded HOPE, told The Sunday Gleaner that the programme is not without its challenges.

He said, also, that he has taken note of arguments that the programme has watered down the training of the JDF, but said the pros outweigh the cons.

“To an extent, that may be true, but the long-term effect has been much, much better than what we have sacrificed a little bit. Whatever we have sacrificed can be fixed. It is easy to remedy that rather than say we can’t do this,” he said.

“There’s no question about it; it absolutely is a good programme for Jamaica. I would suggest that we should be doing a lot more of things like this rather than to be cursing and saying all it’s doing is watering down the JDF.”