Heat on Chang, police chief as country stained with blood from east to west 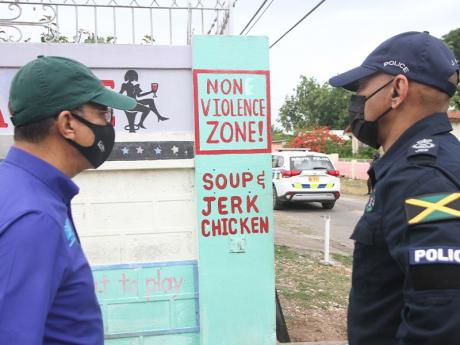 Jamaica's National Security Minister Dr Horace Chang and Police Commissioner Antony Anderson are under mounting pressure to curb a tidal wave of murder that has swept the country, with an average of five homicides committed every day in 2022.

The country was jolted by the brutal murder of nine-year-old Gabriel King on Thursday and 11 homicides in a 24-hour period ending Wednesday.

Gabriel was among five persons murdered across western Jamaica between Wednesday and Thursday, with four double murders – three of them in Kingston and St Andrew – committed nationwide in 36 hours.

One man was also fatally shot by the police in Shrewsbury district, Westmoreland, and a woman and her daughter shot and injured in the same area on Thursday afternoon.

They have been identified as 28-year-old Chevon Robinson, otherwise called 'Beems', of Bottom Melbourne in Salt Spring; 58-year-old Bernie Lewis, a farmer; and 45-year-old Sophia Brown, both of Kings district in Long Hill, Whitehouse, Westmoreland.

Gabriel was reportedly being driven by his mother in an Audi motor car some time after 11 a.m. towards downtown Montego Bay when she slowed down to negotiate a rutted section of the road.

Two men allegedly rushed towards her, dragged her from the vehicle and sped away with the child still aboard.

The police discovered the abandoned car off the roadway in Fairfield. Gabriel was found on the rear seat with his throat slashed.

Councillor Dwight Crawford, who also serves as the vice-chairman for the St James West Central constituency, told The Gleaner that the extraordinary levels of crime need extraordinary actions.

The recent spate of murders reignited a call from Crawford for the reimposition of states of emergency, which were doomed last November after the Government failed to get the single opposition Senate vote needed to extend the measure for three months.

“It is a little unfortunate that when the Government moved to have the extraordinary measures to be put in place, to decisively deal with the crime problem, it was snubbed by the Opposition,” Crawford stated.

But the Government is under pressure to respond with other measures after murders soared by 10 per cent in 2021.

Prior to the nine-year-old's murder, Robinson was at home in Bottom Melbourne when a group of men pretending to be police officers went to his house and ordered him to open the door.

When their demands were not met, the men kicked in the door and shot Robinson and another man. Robinson was pronounced dead at hospital.

The spike in murders has taken St James' murder toll to 13 in 13 days, including the killing of a man in the vicinity of the Mount Salem Police Station.

Gunmen also continued to wreak havoc in Westmoreland, killing the businesswoman and the farmer in Kings district, Whitehouse.

Reports by the Whitehouse police are that about 2 p.m., Lewis was assisting Brown at a supermarket she operates in Kings when two men posing as customers walked in and shot them several times.

Brown and Lewis were pronounced dead at Black River Hospital.

Gunmen struck again on Thursday afternoon in Shrewsbury district, shooting and injuring a female and her daughter.

Reports are that both were at their home when they were ambushed by armed men, who opened fire.

They were admitted to hospital in serious condition.

Since the start of the year, Westmoreland has recorded seven homicides, with three of those incidents being double murders.