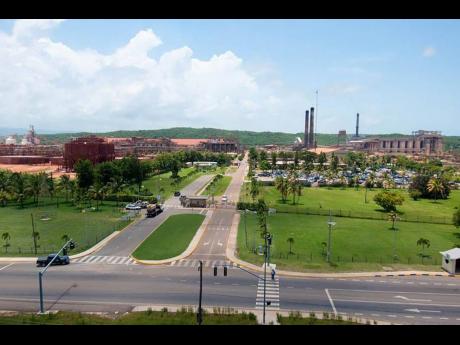 File
The Jamalco alumina refinery at Halse Hall in Clarendon.

Nearly US$100 million or more than J$13 billion in payments made by Clarendon Alumina Production (CAP) over a four-year period to its joint venture partner in the Jamalco refinery cannot be accounted for, a leaked preliminary treasury and financial...

Nearly US$100 million or more than J$13 billion in payments made by Clarendon Alumina Production (CAP) over a four-year period to its joint venture partner in the Jamalco refinery cannot be accounted for, a leaked preliminary treasury and financial review has revealed.

The findings led the review team to recommend that an “intensified surveillance” be conducted to unearth what it claimed were “operational and management deficiencies of the managing partner”.

“Despite recent recommendations by CAP to address this shortfall, it is our understanding that the managing partner is yet to action a resolution of this gap,” the review team wrote, before suggesting that an operational audit be conducted to examine other issues such as procurement and repairs and maintenance.

Jamalco is operated under an unincorporated joint venture arrangement between the Jamaican Government and the Hong Kong-headquartered Noble Group, which controls a 55 per cent stake in the refinery through its subsidiary, General Alumina Jamaica (GAJ).

The remaining 45 per cent is owned by Jamaica and managed through CAP.

Finance Minister Dr Nigel Clarke acknowledged on Friday that the review raises questions about the reconciliation of fuel supply costs to Jamalco and the distribution of these costs between CAP and Noble and promised to get answers.

“I will ask the new board to see to it that this matter is thoroughly reviewed as a matter of priority by an established accounting firm with a track record in auditing,” Clarke said, appearing to question the competency of the review team.

Andrew Simpson, president and chief executive officer of CCA Capital Partners, which conducted the review, declined to discuss the findings, citing confidentiality agreements, but insisted that the report could stand up to scrutiny.

The finance minister indicated, too, that he will seek to ensure that Noble and the Jamalco management team respond to the findings to the satisfaction of the new CAP board and said the country would be updated.

The financial review of Jamalco, insiders told The Sunday Gleaner, was conducted as a precursor to a wider audit that was ordered by Mining Minister Robert Montague earlier this year amid concerns over perceived disparities in what both sides were earning from the refinery’s operation.

“Our partners cannot be making money and owning 55 per cent of the shares, while CAP owns 45 per cent [and is making none],” Montague said in the House of Representatives on May 26 this year.

“Something seems to be wrong. The Government has to borrow funds from time to time in order to help to fund the operations. We want to know how the expenses are broken down and allocated,” he insisted.

In the last 16 years, CAP racked up losses totalling more than US$700 million, causing taxpayers to fork out over US$800 million in finances over the same period, the finance minister told his parliamentary colleagues last week.

According to one insider, the findings of the treasury and financial review were expected to guide the audit ordered by Montague.

“So, they were getting ready to hire auditors and other experts, but that’s when CCA Capital Partners’ contract was not renewed,” the insider charged.

The stage one treasury review involved combing through four years of invoices, monthly statements and transactions posted to Jamalco’s US bank account, according to documents obtained by The Sunday Gleaner.

The review team reported that it was “unable to reconcile” US$53.4 million and US$8.3 million in payments made by CAP in 2020 and 2017, respectively, for production and capital expenses.

“Further investigations will be required via a deep dive into this differential to determine if these flows went to a different operating account of Jamalco or whether CAP utilised these proceeds to settle Jamalco obligations directly,” said the report, a copy of which was leaked to The Sunday Gleaner.

Another glaring concern, according to the report, centred around fuel oil purchases made by the refinery.

It noted that a review of Jamalco’s US bank account showed that US$294 million had been paid to Noble over a three-year period ending in 2019.

The review team said it made enquiries and was told that the payments were “related to” fuel oil purchases for the refinery.

But according to the report, the team was unable to substantiate, through invoices received from Noble, approximately US$37.5 million paid to Noble/GAJ over the 2017-2019 period.

Further, the review team said it was advised that payments are being made to Noble for demurrage charges incurred by the joint venture.

Demurrage refers to a levy imposed for delays in stripping or loading a shipping container.

“However, invoices related to demurrage were not provided, resulting in our inability to identify the entity providing shipping services,” the report said.

The team said its review revealed that Clark Oil Trading Company was the “ultimate seller” of the fuel purchased by Jamalco, though the invoices billed to the Clarendon-based refinery were from Noble.

“It would be robust to reconcile the invoices from Clark Oil Trading Company that were billed to Noble,” it said, suggesting that this should have been done by internal auditors at Jamalco.

Both Noble and CAP have contractual arrangements with external auditors, insiders disclosed.

“However, no such report was made available by the management team of the refinery. Consequently, we recommend further investigation into this tripartite relationship,” the review team said.

It said a senior executive at Jamalco indicated that Noble “facilitated” fuel oil purchases for the refinery over the three-year period because Clark Oil “had an issue dealing with an unincorporated joint venture”.

But the review team said it later discovered that since January last year, Jamalco has been making fuel purchases directly from Clark Oil.

“We are unaware of the rationale for the change in position by Clark Oil given that Jamalco remains unincorporated,” the team noted.

Further, the team said it was not aware of any agreement between CAP and GAJ for Noble to enjoy a spread on this fuel arrangement.

The finance minister said his understanding is that the findings in the “letter” were presented to the previous CAP directors on September 22.

According to him, the then directors decided that they should be forwarded to the executive committee of Jamalco for a response from the management of the refinery to the issues raised.

“It is further my understanding that some pressing incorporation matters and the powerhouse recovery and reconstruction from the August 2021 fire at Jamalco diverted the attention of the previous CAP board and this review has not yet happened,” Minister Clarke acknowledged.

As a result, he said neither Noble nor Jamalco’s management team have seen the queries raised in the “letter”.

Up to late yesterday, there were no responses to questions sent to Clark Oil, Noble and Shanice Neisbeth, general manager of CAP.