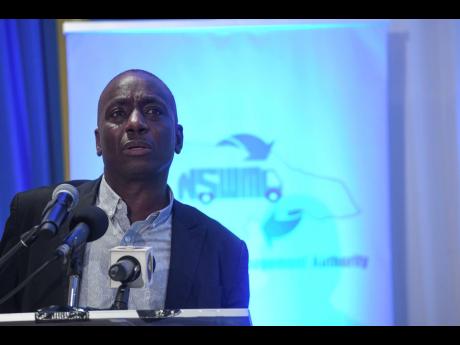 Ricardo Makyn/Chief Photo Editor
Audley Gordon: “Sufficient findings to cause us concern that the policies and procedures were not being followed properly.”

Irregularities uncovered at the National Solid Waste Management Authority (NSWMA) involved payments of more than $30 million, according to “preliminary” estimates by the public cleansing agency.

The abnormalities include “glaring concerns” about the disbursement and encashment of cheques and are confined to the NSWMA subsidiary, Metropolitan Parks and Market, NSWMA board members disclosed on Monday.

They were discovered through an internal audit and spanned a three-month period, which ended in March 2020.

The management of the NSWMA has, however, declined to discuss reports that at least three employees were separated from the company arising from the findings of the internal audit.

But already the NSWMA has called in the Major Organised Crime and Anti-Corruption Agency to probe the irregularities.

The Auditor General Department is also auditing the operations of the garbage collection agency.

“Quite recently an audit exercise uncovered some glaring concerns which we thought, as a board and management, rose to the level of the need for a criminal investigation,” said NSWMA Chairman Dennis Chung during a press conference on Monday.

“We fully support all our staff, but if someone is doing something they are not supposed to do, we are going to get on top of it.”

Chung said the full scope of the irregularities is still not known, but emphasised that the board was being proactive to ensure that “we are on top of this”.

NSWMA director Norman Brown said the internal audit, which was requested by the agency’s executive director, Audley Gordon, had “sufficient findings to cause us concern that the policies and procedures were not being followed properly”.

“The process for the disbursement of funds is what’s in question as to whether the agency got value for money, said Brown, who is also chairman of the board’s audit committee.

Gordon sidestepped questions about employee terminations linked to the irregularities, insisting that it would be “irresponsible” to divulge information that could prejudice the investigation, which is still at an early stage.

“I’m very careful not to link separation to the ongoing investigation,” he said in response to questions from The Gleaner.

“The simplest thing you do could compromise a case and give people the opportunity, for want of a better term, to tek weh demself or not cooperate with an investigation,” said Gordon.