‘We never knew we would be murdered’

Hanover woman claims she was next in line to be sacrificed 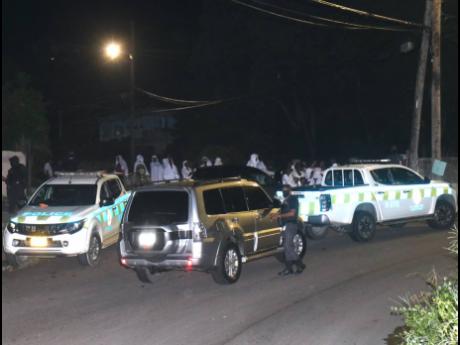 Ashley Anguin/Photographer
Members of the Jamaica Constabulary Force responding to a call at the Pathways International Kingdom Restoration Ministries in Montego Bay, where three people were killed on Sunday.

WESTERN BUREAU: A Hanover woman who was among the congregants at the Pathways International Kingdom Restoration Ministries in Paradise, St James, on Sunday when deadly violence erupted is now emotionally drained after realising how close she came...

A Hanover woman who was among the congregants at the Pathways International Kingdom Restoration Ministries in Paradise, St James, on Sunday when deadly violence erupted is now emotionally drained after realising how close she came to death.

The woman, whose family has asked that her name not be published, told The Gleaner that she has been a member of the religious group for over a year and was contacted on Saturday and instructed to dress in white garments for her visit to the church on Sunday.

She was also told to prepare herself to be cleansed as some members of the congregation will be travelling on a heavenly journey, as an ark would be coming for them at 9:30 a.m. on Monday.

“I thought the term that those who are cleansed would be received on the ark was just a biblical term, and I never dreamt that it was actually our leader who was going to be taking our lives through sacrifice,” the now-remorseful woman said. “A number of the sisters were very happy and anxious to be among those who were to be cleansed, but we never knew that we were going to be murdered.”

Needed to be ‘cleansed’

She told The Gleaner that when she arrived at the location on Sunday afternoon, church leaders had gathered around and were calling up members of the congregation one at a time as a ritual was under way to determine who was worthy of boarding the ark.

“Those who found themselves lucky were placed to one side, while some a we, who he said needed to be cleansed, were placed by ourselves,” she added.

They would be in for a rude awakening, she said, as a senior figure in the church took hold of one of the congregants and began cutting her throat.

“Everybody frighten when him cut the first lady throat. Then him move to a man in front a mi, an cut him a him throat, too,” the woman claimed, adding that she wet herself when she realised she was next in line. “Mi nearly drop down.”

However, she said that before he came over to her, he removed some tubes from a man who had recently been discharged from hospital, causing blood to splash all over.

“Everybody start run fi them life, and same time, mi see one a di leader dem wid a shotgun like the one the guard dem use pon the Brink’s (armoured) truck, and mi hear when the gun fire, but all mi want know seh is that mi run as fast as mi could go,” she said, adding that efforts were made to stop them from escaping.

According to the woman, she was one of the first persons who fled, jumping over a wall into a yard, where she begged a call to tell her mother what had happened.

When asked if she would return to the church if it should reopen, the woman responded “No!”, emphatically.