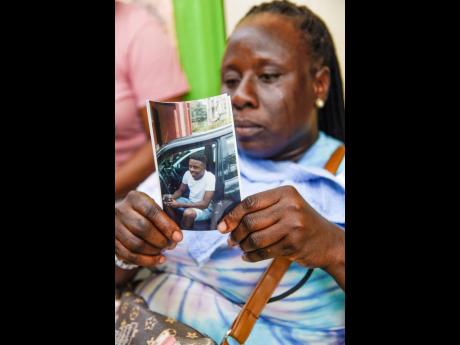 Dhaima Facey's knees buckled as she collapsed in a doorway at her Foster Lane, Kingston, home as she beseeched for the safe return of her 25-year-old son Garth Williams, who has been missing since Saturday.

“I was actually in my room cleaning and he was outside and he came in. I saw his slippers on the step, so I know he was in the room. I went back in my room. The last glimpse I glimpse, me see when him pass me right here and going through the gate,” Facey said.

She said that Williams, who was last seen wearing a pair of adidas slippers and a pair of blue shorts with adidas stripes on both sides, did not tell her where he was headed.

Facey said that her son was not wont to break the coronavirus curfew, so when at 10 p.m., his whereabouts remained unknown, she began to feel uneasy.

“My smaller daughter said to me, 'Mommy, Garth nuh come in'. I thought he was outside talking about football. I went to look out there and realised he was not out there … ,” she said.

That was when it hit her that she needed to place a call to his phone.

“Mi only hear, 'You have reached the voice mailbox of ... .' Mi call, mi call, mi call. It arose some suspicion that something probably happen,” Facey said.

She spent all of Sunday walking about in the community, enquiring among residents if they had seen her son.

On Monday, she was still no closer to solving the mystery as her fears heightened.

“We not getting anywhere. We going into 48 hours and nobody has seen or heard anything from him,” she told our news team, adding that the last location she gathered from her enquiries was someone spotting Williams on East Queen Street.

All of his personal belongings are still at his residence, his mom said.

Williams, who was reportedly working part-time as an assistant coach, was a former graduate at St George's College with six Caribbean Secondary Education Certificate passes.

Facey described Williams as secretive but “highly motivated and spiritual”.

“He knew what he wanted and refused to accept anything else,” she told The Gleaner.

“Him is the softest person in the world … ,” she added, speaking of his demeanour and laid-back personality, mentioning that she often told him to be bold.

She is not ruling out his sudden disappearance being a result of the crime wave crippling central Kingston. In fact, she believes he may have been a victim of the ongoing war.

“Mi a look pon all angles that he could be a victim of that ... because him live in a this lane, Foster Lane, and dem have rivals over the other lane over the other side. Persons know him from that side and the other side,” Facey said, noting that her son attended school with members of the factions now at odds.

“Dem know what type of person him is and know him nuh mix up in a certain things. The last time I said to him say, 'Garth, weh yuh want? Yuh nuh see how the place a run? Why are you walking up and down in a the community?'” she said, also telling The Gleaner that Williams replied that he was God-blessed.

Checks with the police, the Kingston Public Hospital and the morgue have also not turned up any clues as to where her son might be.

“If dem kill him, mek we get the body,” she pleaded.