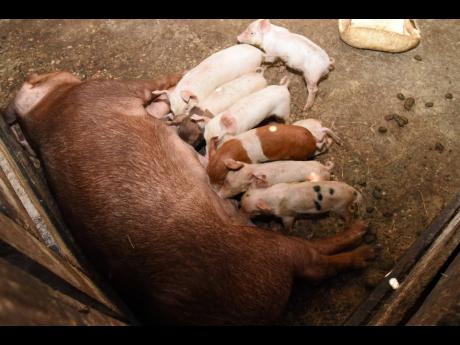 Kenyon Hemans/Photographer
Piglets suckle their mother at a farm in Kingston on Saturday. Stakeholders in the pig industry have warned of a looming shortage of pork that could extend into Christmas. 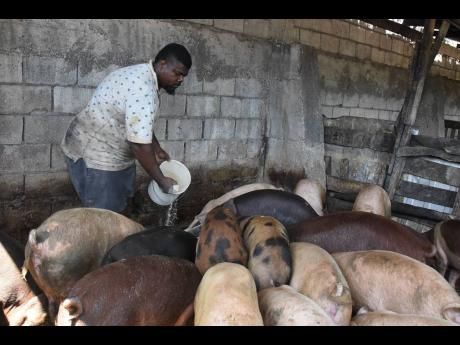 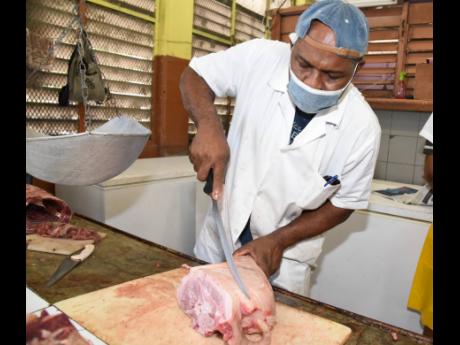 Kenyon Hemans/Photographer
Marcus Weise, a butcher at the Cross Roads Market, speaks about the looming pork shortage as he cuts slab of the favoured meat on Saturday.
1
2
3

Jamaicans eager to pig out this Christmas might find pork in short demand. Stakeholders in the pig industry are warning that the continued impact of the COVID-19 pandemic and the increase in input costs like feed will continue to turn the screws in...

Jamaicans eager to pig out this Christmas might find pork in short demand.

Stakeholders in the pig industry are warning that the continued impact of the COVID-19 pandemic and the increase in input costs like feed will continue to turn the screws in the coming months.

President of the Jamaica Agricultural Society (JAS), Lenworth Fulton, is one of the voices sounding an alarm.

“We have not really gone through a shortage situation yet, but many of the small pig farmers are facing serious problems in the purchasing of feed and so on. So yes, the industry is tightening up,” Fulton said on Saturday.

He estimated that up to 80 per cent of the industry are small, non-contract farmers who have to identify their own market to sell their produce. Small farmers possess fewer than 20 sows and 40-60 fatteners for consumption.

Fulton explained that the glut of pork, which affected the market for some time, had diminished the ability of farmers to sell their livestock. As a consequence, many scaled back their operations to remain economically viable with the intention of increasing production in the future.

However, the continued increase in the cost of feed has impaired their ability to ramp up production, he said. Despite the introduction of subsidies, those interventions have been viewed as insufficient to cushion inflationary pressure, partly driven by fluctuations in the exchange rate. He is hopeful that with the most recent appreciation of the dollar, farmers might see some reprieve.

This has the potential to impact consumers in the coming months as the demand for cured products such as ham is expected to increase.

Quizzed on whether there might be a shortage of pork during Christmas, Fulton frankly stated, “There might be, and I think there will be.”

At present, pork averages $380 to $450 a pound, said Fulton. Based on current trends, these prices could increase to above $550 per pound.

Compounding this issue, he said, is the difficulty in measuring the number of pigs being reared.

“We do not have the same accuracy in making predictions as we would be in the broiler meat, poultry, and the egg industry,” he said.

Unlike the chicken industry, which has two major companies that control supplies for both broiler and layer chickens, the pig industry does not have the same level of oversight. According to Fulton, this lack of guidelines has contributed to an “unstable pork market” as farmers have had to rely on discretion in determining when to increase production.

Timothy Lym, managing director of Brooklyn Supermarket and a director in the Progressive Grocers Group, has already started to see the impact of this instability. The first red flag he noticed was when he observed prices rising a few months ago.

“I know that there is a shortage. It has not reached the point where I cannot get supplies, but prices are trending up,” Lym said. “In other words, usually when the prices go up is when the supply of pork has started to dwindle.”

Although he is not worried at this time about the availability of pork, he did not rule out the possibility of a shortage of ham and bacon during Christmas.

“We did have a problem with supply of the [ham] market last year. It ran out on us … . We are currently having a problem with bacon as we can’t seem to get bacon locally on the market. Bacon is definitely in really short supply,” Lym said.

The shortage, first identified two to three months ago, is an islandwide issue that goes beyond the 30 stores in the Progressive Grocers Group.

The bacon shortage has also impacted popular fast-food restaurant Burger King, with a number of customers complaining about the absence of the choice meat in their sandwiches.

“Since May of this year, we have been faced with the challenge of consistently providing our Burger King customers with bacon for their meals. This has been due to the inability of our franchise-approved local bacon supplier to meet our usual demand as a result of international shortages of pork belly,” Lisa Lake, group CEO of the Lake Group of Companies, told The Gleaner on Sunday.

Nevertheless, customers will soon see a return of bacon. Lake described as “good news” information from Burger King’s supplier that inflows of bacon are expected to be resumed by the weekend, with provisions secured for the rest of the year.

Shortages of products like bacon have been observed worldwide because of supply-chain disruptions and the impact of the African swine fever. Within the Caribbean, African swine fever has been identified in Jamaica’s neighbours, the Dominican Republic and Haiti.

While the highly contagious disease is not known to impact humans, it is almost 100 per cent fatal in pigs and could lead to the decimation of the local porcine population. These concerns, said the JAS’s Fulton, have caused the Jamaican Government to be apprehensive about allowing the importation of pork products in order to protect the industry from diseases.

Marcus Weise, a butcher at the Cross Roads Market, also believes that there may be a shortage in the coming months.

At present, he sells pork for $500 a pound, which is the highest price he said he has charged. He added that farm theft, conservatively billed at $6 billion annually, has contributed to the shortage of pork, mutton, and other meats as livestock interests have grown weary with losses.

Mark Brown, another butcher at the market, explained that prices have been steadily increasing in recent months because of jumps in the cost of pig feed. Since the pandemic reached Jamaica’s shores in March 2020, he estimates that the price of pork has risen by $150 per pound.

Huntley McKenzie, who owns a piggery in Clarendon, shared that the price of pork does not reflect the cost of production.

“Because of the current increase in feed prices, a lot of farmers will be coming out. So there is going to be an imminent shortage,” he said.

McKenzie said that over the last five months, the price of feed has increased several times.

“The pig companies who target the big supermarkets and the hotel industry, they can survive, but the regular farmer might be getting $250 a pound for their pork. It costs much more than that to produce. To break even, you would have to be selling upwards of $350 per pound,” said McKenzie.

Delroy Manya, former president of the Jamaica Pig Farmers’ Association, said that a number of small farmers did not make preparations for the Christmas market because of dampened demand for pork products.

With the tourism sector consuming most of the pork produced locally, Manya said that small and large farmers, who drastically scaled back because of the pandemic, have not sufficiently ramped up production to meet anticipated heightened demand.

He does not anticipate shortages of ham during Christmas as some major processors have stockpiled supplies.

“Based on what I am seeing, the fresh pork market might have a little challenge, but these major processors who were able to stockpile may be able to roll out some of their stock for the Christmas market as some of them are producers … ,” he told The Gleaner.

“What we have in stock should be able to carry us throughout Christmas without any major shortage,” Manya added.