Eyes on Holness: PM pressed to declare whether Vaz fit after US flags visa 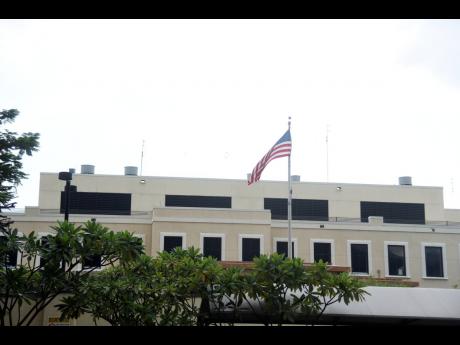 Nicholas Nunes/Photographer
The American flag flies at the United States Embassy on Old Hope Road, St Andrew, on Sunday. The embassy has declined to comment on accusations of a cover-up by former ambassador Donald Tapia. 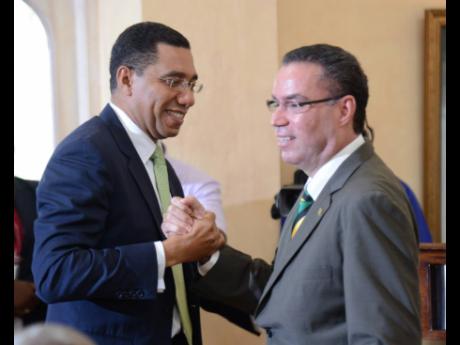 File
Prime Minister Andrew Holness (left) congratulates Daryl Vaz at a swearing-in ceremony of Cabinet ministers and ministers of state at King’s House on Monday, March 7, 2016. Holness is under pressure to address the latest twist in the Daryl Vaz visa saga.
1
2

WESTERN BUREAU: As he heads into a meeting with his Cabinet today, Prime Minister Andrew Holness faces mounting pressure to declare whether Science, Energy and Technology Minister Daryl Vaz retains his confidence to represent the Jamaican...

As he heads into a meeting with his Cabinet today, Prime Minister Andrew Holness faces mounting pressure to declare whether Science, Energy and Technology Minister Daryl Vaz retains his confidence to represent the Jamaican Government because of a controversial annotation relating to substance trafficking on the politician's United States visa.

President of the Jamaica Manufacturers and Exporters Association, John Mahfood, has described Holness' silence on the recent development, following a revocation of Vaz's visa back in 2019, as “unfortunate”.

“The US visa matter and Vaz have cast a negative image over the Government and is not transparent,” said Mahfood, adding that Holness has “never clearly explained to the public why he (Vaz) lost his visa and why he thought it was appropriate to maintain his important status in the government”.

Head of one of the highest-profile business lobbies in the country, Mahfood argues that Vaz's history of controversy has raised questions about the capacity of the Holness administration to manage the country's affairs.

Vaz was shuffled from the land portfolio after it emerged that he had sought to lease lands bordering the protected national forest at Holywell in 2019. He dropped the lease bid.

The Portland Western member of parliament was also hammered in a contractor general's report for allegedly interfering in 2017 negotiations led by the Urban Development Corporation to sell a St Ann property to Mexican investors, Moon Palace Resorts, which indicated last year that it was pulling out of the deal. Vaz denied any impropriety in his actions.

On Sunday, Mahfood criticised the prime minister for handling the Vaz visa saga “very badly … from the very start”, declaring that statements from former US ambassador to Jamaica, Donald Tapia, do not “satisfy me”.

Under US immigration law, 212 (A) (2C) (1) speaks to controlled substance traffickers.

It refers to a visitor who the consular officer or the US attorney general knows or has reason to believe is, or has been, an illicit trafficker in any controlled substance or in any listed chemical or is, or has been, a knowing aider, abettor, assister, conspirator, or colluder with others in the illicit trafficking in any such controlled or listed substance or chemical, or endeavoured to do so.

Vaz has denied any wrongdoing and said allegations made against him were investigated and found to be “baseless”.

Tapia, whose 17-month stint here ended in January, said the granting of the visa was Washington's attempt to right a historical wrong and accused consular officials of hatching a cover-up by flagging Vaz's status.

“Nobody wants to admit when they're wrong. They're government employees. You don't want to make a mistake if you're gonna get promoted … . If you made the wrong decision, you try to cover it up a little bit, you won't admit it,” he told The Sunday Gleaner.

Tapia, a business tycoon close to former US President Donald Trump with little diplomatic experience, earned a reputation in Jamaica for being a motormouth, even drawing a reprimand via Twitter by Jamaica's foreign minister Kamina Johnson Smith. His views are unlikely to represent those of the current Democratic Biden administration.

Tapia's claim of a cover-up is confusing and requires clarification from the prime minister, Carol Narcisse, a civil-society advocate, told The Gleaner on Sunday.

“How is that a tenable status for a representative of the Government of Jamaica soon to travel to the US to represent the country?” she queried of the notation on Vaz's visa.

Narcisse added: “The implications of the whole episode remains very serious. Our parliamentarians and ministers of government must be, without any doubt, people who can, without reservation, pass fit-and-proper standards here and internationally if we are not to be at risk of state capture by undesirables.”

Jettisoning Vaz would be an embarrassment to the Holness administration after losing Agriculture Minister Floyd Green after presumed COVID-19 breaches after the parliamentarian was caught on camera partying with political colleagues and others on a no-movement day. Over the last three years, Holness has lost, or had to shuffle, at least five ministers because of controversies ranging from allegations of nepotism, corruption, and impropriety.

The US Embassy in Kingston has said it cannot comment on the issue because visa records are confidential under American law.

“We continue to focus on the important issues of our bilateral relationship with Jamaica, including responding to COVID-19, climate change, trade, and security,” an embassy spokesperson said on Sunday.

When asked if the Jamaica Constabulary Force had an interest in investigating Vaz's waiver, Senior Superintendent Stephanie Lindsay, head of the police information arm, declined comment.

President of the Private Sector Organisation of Jamaica, Keith Duncan, also did not wish to address the matter.

In November 2019, National Security Minister Dr Horace Chang confirmed that the US revoked the visas of Vaz and Phillip Paulwell, a former minister in the previous People's National Party administrations.

Tapia said complaints against the two politicians were made to the US while the Portia Simpson Miller-led People's National Party was in office.

According to the former ambassador, he reviewed Vaz's case on the request of Holness, who he said was considering Vaz for a very important ministry. He said it was later determined that the complaints against Vaz were “conjecture”.

The Opposition PNP has called for further clarity on the issue, insisting that if it is not forthcoming, Vaz, who heads to the US shortly on official business, should be ousted from the Cabinet.