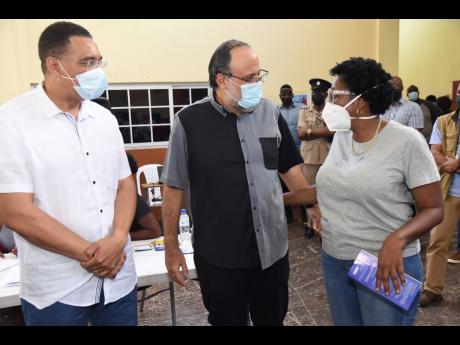 Gang violence in the St Andrew South Western constituency is crippling efforts to drive up vaccination against COVID-19 in several communities there, increasing concerns that the most vulnerable may be left behind.

The constituency, represented by Member of Parliament Dr Angela Brown Burke, is one of the more populous seats in Kingston and St Andrew, boasting more than 25,000 enumerated residents.

But fewer than 300 turned out for the Ministry of Health and Wellness’ vaccination blitz on Friday at the Caribbean Palms Community Centre, Brown Burke confirmed with The Gleaner on Sunday, despite visits from Prime Minister Andrew Holness and Opposition Leader Mark Golding.

Brown Burke said, however, that the figure is reflective of a good day, eclipsing the previous turnout for a blitz staged at Haile Selassie High School, also in the constituency, where the number was far fewer.

Before that time, fewer than 30 people had taken up an offer by the member of parliament to travel to the National Arena in St Andrew for one of several blitzes hosted there.

“It has been extremely difficult and I’ve never hidden that,” Brown Burke told The Gleaner on Friday.

She said that apart from the misinformation being circulated about the vaccines, communities within the constituency are deeply divided.

“Right here is Greenwich Town, and West Avenue people don’t want to come over here because of their safety,” Brown Burke disclosed.

Rival gangs have marked their territory, triggering a turf war.

The community centre is located in the heart of Greenwich Town.

Brown Burke said while she has reached out to the police for assistance, the lawmen are stretched thin.

In May 2020, National Security Minister Dr Horace Chang reported that in the Police Area Four, which comprises the Kingston Western, Kingston Central, Kingston Eastern, St Andrew Central, and St Andrew South police divisions, 249, or 64 per cent of the total gangs across Jamaica are active.

At the divisional level, the minister said, 78 of the gangs identified across the island, or 20.1 per cent, were resident within the St Andrew South Police Division. The St Andrew South Western constituency is situated in this division.

“So the police are here giving us support, but the people actually want them in the communities. Persons have also said to me to send the bus (health ministry vaccination bus) so that it can move from community to community.

“I’ve been discussing it with them because I also know that resources are stretched, but it has been really difficult,” said Brown Burke.

She noted that there is one community in particular that needs special attention, pointing out that a blitz on its own would not be enough to convert residents.

The Gleaner understands that that community is Majesty Gardens, where there is a deep aversion to COVID-19 vaccines, coupled with persistent violence.

Clarence Whyte, 82, and his 76-year-old wife, Cynthia, said that they turned up at the blitz only because it was being conducted close to home.

The seniors, who have been married for 52 years, said that they were not able to travel to the National Arena when the call was first made for seniors because of the distance.

“I only came out because it’s nearer to me. I never really plan to go so far up at the Arena with the whole heap of crowd,” Cynthia said, adding that she was grateful the blitz was brought to the community.