Fight over for warrior Allwood-Anderson 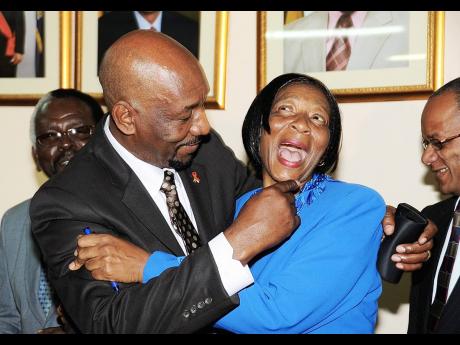 File
Edith Allwood-Anderson enjoys a playful moment with then Health Minister Rudyard Spencer after signing a wage agreement in September 2009.

Firebrand nurse and trade unionist Edith Allwood-Anderson, whose acerbic rhetoric rattled political negotiators and charm salved their wounded egos, passed away on Thursday after a long battle with illness.

Allwood-Anderson, who served as president of the Nurses Association of Jamaica (NAJ) for a record eight years, passed away at the Kingston Public Hospital on Thursday. She was 66.

The veteran nurse, who was open about her illnesses, had renal failure and was undergoing weekly treatment. She was also diabetic.

Described as one of Jamaica’s foremost nursing advocates, Allwood-Anderson will be remembered for her fierce, bareknuckled lobbying at the bargaining table for improved wages, fringe benefits, and working conditions.

“She has always had nursing at heart and wanted to see the best for the profession and nurses,” former NAJ President Carmen Johnson told The Gleaner on Thursday.

During that time, the trade unionist spearheaded several protests, including one in front of the Kingston School of Nursing on Half-Way-Tree Road in St Andrew.

She managed to command the attention of then Finance Minister Dr Omar Davies, who joined the protest, having failed to settle the matter there and then.

A year later, Allwood-Anderson would stage another protest in front of the Ministry of Finance, this time under the Bruce Golding administration, cornering then Finance Minister Audley Shaw, who had, in the run-up to the 2007 general election, promised to double nurses’ salaries.

That same year, she was conferred with the Order of Distinction (Officer Class) for her contribution to the nursing profession.

“She was always willing to fight for us. She was passionate. She tried her best to serve well. She served the association well and in whatever capacity she could and tried her best to do what she did,” Johnson said of the woman who gave 35 years to the profession.

NAJ President Patsy Edwards Henry, who shared a close relationship with Allwood-Anderson, was inconsolable and unable to speak.

NAJ first Vice-President Carmen Brissett, who spoke on behalf of Edwards Henry, told The Gleaner that the association was saddened by her death.

“I don’t know that we will see someone like her again in the association, but I do know that she will never be forgotten,” Brissett said.