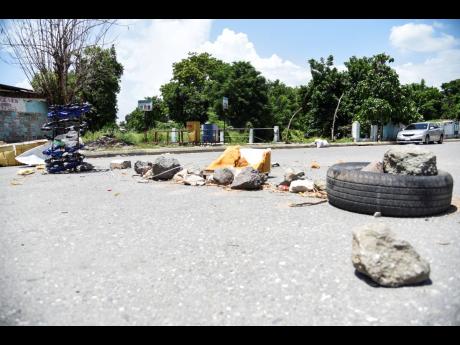 Nicholas Nunes/Photographer
Residents of Harris Street, Rose Town, have blocked the road to stave off drive-by shootings and other acts of violence. 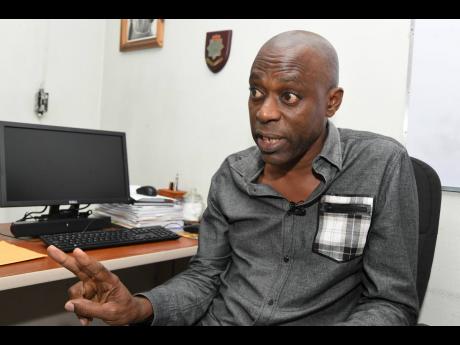 Communities like Rose Town have been diagnosed as incubators for war-ready children in Kingston Western – one of the most blighted and violence-torn police divisions in Jamaica.

Several streets in the community are littered with barricades – stark metaphors that the series of lockdowns imposing no movement already resonate daily in many of Kingston’s low-income neighbourhoods where gun violence is more feared than the coronavirus.

To intruders, the mishmash of tyres and large stones represents an obstacle course thwarting their bloodlust, but for residents of Rose Town, they are a shield that gives comfort and just enough time for a dash from death.

Dr Herbert Gayle, anthropologist and lecturer at The University of the West Indies (UWI), Mona, said that debris like discarded refrigerators and abandoned cars impose an infectious sense of fear, with the slightest trigger likely to spark a counterattack.

On Sunday, no vehicle could traverse Harris Street without interruption and skilful navigation.

In fact, the pathway from Harris Street to Georges Street is impassable, and similarly so for Unity Lane on to Harris Street.

Speaking from behind his gate, a resident said the roadblocks have been mounted because of an upsurge in violence.

“We have to gwaan watch and live,” the resident, who like many in inner-city communities requested anonymity, told The Gleaner on Sunday.

Not far away, a woman walked briskly to another section of the community, hardly willing to stop to talk, except to mutter a few words about the blockades.

A botched drive-by in the community a few days ago, following a spate of murders and shootings, has caused spiralling fear in Rose Town.

On August 22, the first of the no-movement days offered no deterrent as gangsters pounced upon 56-year-old Paula Raphael on Unity Lane and shot her to death about 11:15 a.m.

This killing followed the brutal murder of 51-year-old Courtney Kelly and injury to three other members of his Bentley Lane household at 2:30 a.m. that same day.

As a cameraman took photographs of the barricaded community on Sunday, a group of children watched in earnest, seemingly intrigued by the shutter speed.

“Sir, you go round deh side deh. It block off, too,” said one of the children. “A because of the war, we can’t stay outside. We haffi play inna we yard, roun’ a di house back.”

That profound conclusion sums up the fragility that defines Rose Town and other such inner cities, where access to food, safety, and shelter is unpredictable.

“The second block of what we call ontological security, which is a sense of future, which makes people feel calm, is already gone. The immense fear of those symbols of reminders, which, of course, are the constant blockades, is going to be added to the fact that this child also lives in an environment where there is a problem with food,” the academic said.

Gayle added: “The girl is pushed and pressured by everybody to stay in school while [boys] are socialised to be a soldier. You can’t be soft … so the social side fits into the demands of nature, which, for the male, is already more aggressive in terms of hormones … . You are taught to be protective while girls are taught to be protected.”

Citing data from studies conducted over three decades in Jamaica, Belize, and Trinidad, Gayle said that the findings suggested that one in 20 inner-city boys here was destined, by sociological factors, to end up committing murder compared to one of 150 girls.

Chronic hunger is higher among boys than girls in the most violent communities, said Gayle, noting that that was one of the triggers for antisocial behaviours.

Gayle recommends closing the gap of inequality and providing more socio-economic opportunities as key to breaking the cycle.