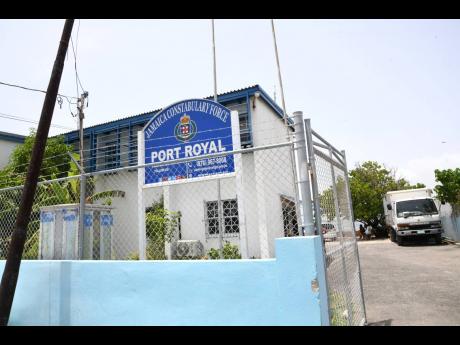 Rudolph Brown/Photographer
The hunt is on for three men escaped from the lock-up at the Port Royal Police Station in Kingston before daybreak yesterday.

Residents of Port Royal in Kingston were awakened yesterday to sirens and a heavy police deployment with a manhunt under way inland and along the shoreline for three prisoners who went missing before dawn.

The police said that preliminary investigations indicate that the men escaped from the Port Royal lock-up by cutting a hole in the cell door.

A workman, who said he was employed to patch a crack in a wall at the lock-up some three months ago, intimated that the inmates might have been planning their escape for some time.

He told The Gleaner that the conditions were not conducive to working at his age.

“Mi don’t like in there. You see like now, ‘bout 1 p.m., and in deh dark like yuh [black] gansey. Mi step pon a man in deh, and when mi say, ‘Bredrin, turn the light deh suh ‘cause me step pon something’, when mi look is a man deh down there,” he said, adding that he has also done pipe work at the facility.

Surprised residents of the seaside town vowed not to accommodate the escapees in their midst.

“Dem nuh suppose to deh yah in a nice, nice Port Royal cell. Dem supposed to deh in a some sophisticated place lock weh,” one resident said, pointing to the serious charges.

Meanwhile, two convicts are still at large after escaping custody at the Hunts Bay Police Station in St Andrew between August 5 and 6.

Both men were recently convicted for illegal possession of firearm and ammunition and were being awaiting sentencing at the time of escape.