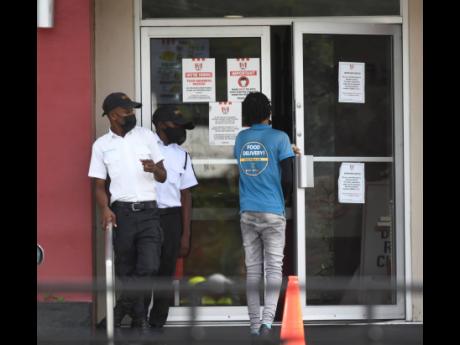 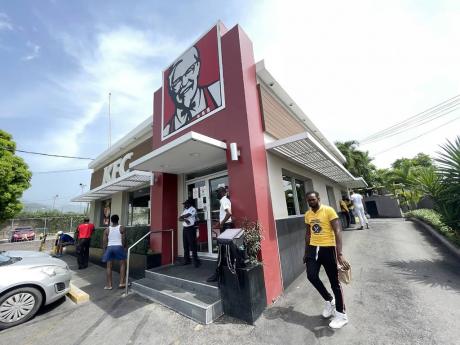 Ricardo Makyn/Chief Photo Editor
A customer waits in hope outside the entrance to KFC Old Hope Road as a delivery man walks from the drive-through window on Sunday.
1
2

Several authorised workers were miffed after being turned away from KFC locations on Sunday and were advised to use the E-commerce National Delivery Solution (ENDS) portal to facilitate quick-service food deliveries from registered businesses.

That about-turn caused confusion at some outlets, with the fast-food restaurant feeling the ire of a policeman who tried to get food at both KFC locations The Springs and Old Hope Road but left empty-handed.

Last Tuesday – the finale of a three-day lockdown – several major fast-food chains urged authorised workers to patronise their stores in person, with KFC dubbing its campaign ‘open to serve those who serve us’.

Sunday was the fourth of seven no-movement days imposed by the Government to rein in a record wave of coronavirus infections, hospitalisations, and deaths.

KFC, however, posted on Instagram later on Sunday an advisory from the Office of Disaster Preparedness and Emergency Management (ODPEM) indicating that the restaurant chain was now guided by the notice.

The Springs plaza location near Half-Way Tree facilitated exempted customers via the drive-through. Pedestrians were allowed to make purchases at the drive-through window on condition that they were socially distant.

Another policeman said he turned up near the Old Hope Road KFC and pinned his location there so he could get through quickly.

“Your work is sensitive. You want to buy something, you must be able to buy something. So, basically, what I have to do, I order, then come here, put my location here, so I pay somebody to go in there and bring it to me,” the policeman said.

Several call-centre workers joined the queue at KFC Springs and cited the limited time given for lunch and the closeness of the location.

“I am at work, and as I get off the phone, I just come and order. ENDS makes no sense because we get only one-hour lunch break. I tried it once and it took too long,” a call-centre worker said.

KFC personnel at The Springs said that only authorised persons or those registered with ENDS would be served on Sunday. However, that stance was contrary to the position of an employee at the Old Hope Road location moments later.

“Customers, you are not allowed on the premises today. Please leave the premises. Today is a delivery day. Stay home, and order your food,” she shouted from the doorway.

Efforts to speak with Andrei Roper, Restaurants of Jamaica brand manager, were unsuccessful as several calls to his cell phone went unanswered.

Amashika Lorne, ENDS project manager, in shedding light on the portal’s purpose,, said it deals with the submission from the different types of businesses, vetting the documents and approving them.

“We have been oversubscribed, so the teams are working assiduously in the week to get through as many of the approvals, but we are asking for the continued patience of the people,” Lorne told The Gleaner on Sunday.

She said she did not have data on the full enrolment numbers under ENDS.

Actual payment and the placing of orders is not executed on the ENDS platform itself, said Lorne.

“KFC, for example, uses 7Krave, so when you go on the 7Krave platform, you choose the number and you make the full payment, which also includes the delivery,” she said.

The enrolment of businesses, large and small, has been on the rise, but Lorne said that more work is needed where digital literacy is concerned.

“Coming into this week, we saw more smaller companies catching the wave … . A lot more people had signed up over the course of last week … ,” she said.

“The digital literacy across the island varies and we, in the first tranche, being on the road, going out into the communities and different locations, it did take quite a bit of hand-holding.”

She said ENDS, a collaboration between the Government of Jamaica and the Private Sector Organisation of Jamaica, has been overwhelmingly positive.