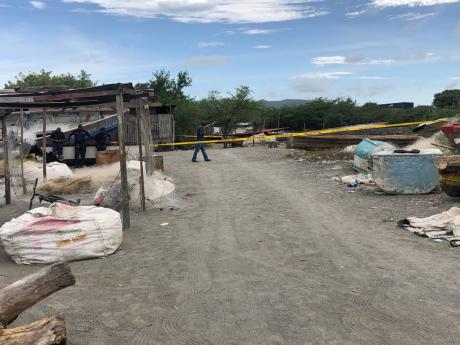 Fisherfolk at the Portmore fishing beach at Dyke Road in the St Catherine municipality are appealing to the security forces to help keep away unscrupulous individuals from the property following yesterday’s shooting of two men close to the seaside.

A Marine Police post at the location proved to be no deterrent to two men travelling on a motorcycle who entered the premises about 2 p.m. and shot two men before making good their escape.

Reports are that the gunmen briefly spoke to a group of men before opening fire at the two, who were subsequently rushed to the hospital.

Up to news time, the police said they were still being treated for injuries.

“Strangers weh come ya a bait we up. Nobody nuh supposed to can come dung here unless them a fisherman weh base pon di beach,” one fisherman lamented. “You nuh work ya suh, yuh nuh fi deh ya suh. A must fish ya come buy and leave. Nuh come associate dung ya.”

Another fisherman, who witnessed the shooting, is thankful for a wasp nest, which he claimed caused him to be out of sight of the gunmen.

“Yuh see how close me deh to them? ... One wasp deh over me head a bother me, so mi go lick off the nest and the wasp dem still a come ‘roun, so mi couldn’t sleep pon di fridge top. Mi affi go over in a di tree root. So a dat mek dem nuh see me,” he explained.

He was awakened by the loud explosions and stood his ground until the gunmen rode away.

“A di shot dem wake me up, but mi just happy say God work it that way that I was in the tree root a sleep. A di wasp dem save me ‘cause is like dem just a shoot anybody as far as weh me see,” the fisherman told The Gleaner.

The fisherfolk are hoping that yesterday’s incident will not turn away potential customers.

Since the start of the week, shootings have kept crime-scene investigators busy in Portmore.

Up to August 11, the St Catherine South Police Division had recorded a 17 per cent increase in murders year on year; however, shootings for the period have decreased by 11 per cent, falling from 63 to 56.