No excuse not to be vaccinated now, says Chuck 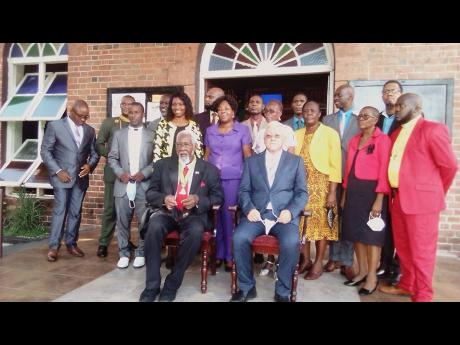 Photo by Ruddy Mathison
Custos of St Catherine Jeffery McKenzie and Justice Minister Delroy Chuck (seated in front) with some of the newly commissioned justices of the peace at a commissioning ceremony in St Catherine, yesterday.

Justice Minister Delroy Chuck has said that there is no excuse for Jamaicans to now not take the COVID-19 vaccine, emphasising its importance in crippling the COVID-19 pandemic.

Speaking yesterday at the commissioning of 207 new justices of the peace at the Philippo Baptist Church in Spanish Town, St Catherine, he noted that previously, Jamaicans could use the excuse that there were not enough vaccines available, but there was now an adequate supply of jabs locally.

The new JPs commissioned yesterday bring the total number of active justices in St Catherine to just over 1,200.

“I must encourage you and other justices of the peace to find persons of impeccable integrity, persons with unblemished character who will want to serve as justices of the peace,” he said at the commissioning ceremony, which was largely held virtually due to COVID-19 restrictions. This restricted the number of JPs who could have been in attendance to take the oath of allegiance and the oath of affirmation during the ceremony.

Chuck cautioned the newly sworn JPs that they are expected to offer their services honestly and do so without fear or favour even as he urged them to be honest in their dealings and not undermine the integrity of their office..

“It is important that you stand up for what is right, that you stand up against anyone who seeks to use their service and corrupt the process of governance,” the justice minister urged them, noting their role in fighting corruption and other illegal acts.

Director of Training and Academic Affairs at the Justice training Institute Karen Campbell-Bascoe said that 214 individuals were approved for the virtual training, and the other seven who were not commissioned yesterday would be made JPs at a later date.

Acting Permanent Secretary in the Ministry of Justice Grace Ann Stewart McFarlane reminded the JPs that they would receive new seals, permitting them to perform their duties outside of the parish to which they are assigned.