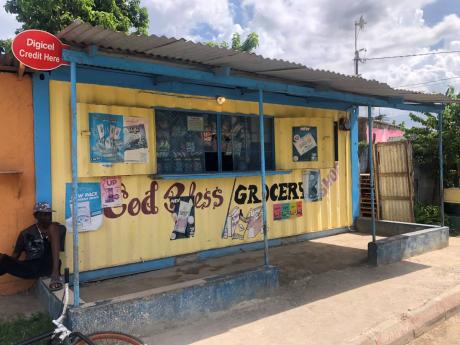 A Gregory Park family is mourning the loss of two relatives who were killed in separate incidents a day apart in the low-income St Catherine community, which has recorded three murders since Sunday.

In the latest killing yesterday, unknown assailants posing as customers shot and killed 40-year-old Avalon ‘Paka’ Gutzmore about 10 a.m. inside his shop on Valencia Pathway.

Relatives who spoke to The Gleaner said Ricketts went to a shop to buy chicken and chips when he was gunned down.

An aunt told The Gleaner that Gutzmore possibly was killed for rebuffing extortionists.

“A mi nephew dem kill Monday, and dem kill me next nephew a while ago,” she said yesterday. “Dem want extortion money, and dem come kill him for nothing at all. Dem a extort him and him nuh want pay dem, so dem kill him.”

When our news team arrived at the God Bless Grocery establishment, the family was cleaning out the blood-soaked shop.

The aunt who spoke to The Gleaner said she last saw Gutzmore on Tuesday.

“Mi hear say somebody come and call for ‘Serve’, and him come round and a sell dem, and a mussi dat time [the fatal bullets were fired],” the grief-stricken aunt related.

Gutzmore’s mother and another woman said to be his baby-mother were at the scene but were too distraught to speak.

Reports from the Portmore police are that about midday, a passer-by reportedly heard explosions and alerted them.

On their arrival, Linton was seen lying on the roadway with gunshot wounds.

The scene was processed and the body removed to the morgue.

Up to August 5, the St Catherine South Police Division had recorded a 21 per cent increase in murders year on year. However, shootings for the period had decreased by 10 per cent.

Shootings have dropped from 61 to 55 year on year for the same period.