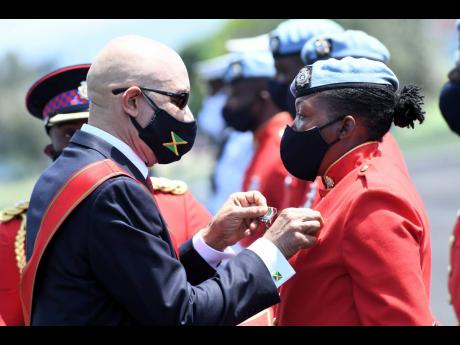 The colourful affair took place at the Polo Field at Up Park Camp and highlighted the continuation of the profession of arms and of national service in the military.

The assets of each brigade were also on show including coast guard boats and armoured trucks, all of which are used in the day-to-day operations of the army.

The event was marked by the presentation of 140 medals to the junior ranks.

Sir Patrick presented the first 70 followed by the prime minister who delivered the remaining 70.

In his message the governor general said, “Armed Forces Day 2021 provides us with an opportunity to recognise and thank our soldiers for their dedication to duty.”

The prime minister who is also minister of defence said, “Not only are our soldiers well trained, well adapted and competent, but they are also among the best in the region and the world.”

Entertainment was provided by the military mass bands and drum corps.

The curtain came down at 1130 hours with the fly-past feature involving five JDF aircraft which flew over the parade from the south to the north.