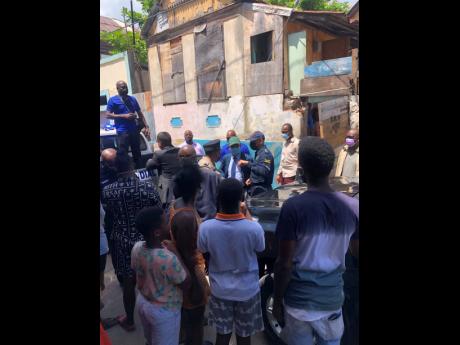 Photo by Andre Williams
Police Commissioner Antony Anderson and National Security Minister Dr Horace Chang meeting with residents in a section of central Kingston yesterday. The area is tense after gang violence has caused a number of deaths in recent weeks.

Parents are locking away their children in central Kingston amid threats to kidnap minors who are labelled as informers, heaping more concern on frantic caregivers, who are already shielding from intense gang conflicts. “Dem say di pickney dem a...

Parents are locking away their children in central Kingston amid threats to kidnap minors who are labelled as informers, heaping more concern on frantic caregivers, who are already shielding from intense gang conflicts.

Scores of residents, in a showing hardly seen on the streets since the general election last September, came out yesterday to meet with Minister of Security Dr Horace Chang, Commissioner of Police Major General Antony Anderson, Member of Parliament Donovan Williams and members of the Kingston Central police set-up, who toured affected areas and met with victims of crime.

“We want bare police and soldier ‘round ya so, so the place can run under peace and quiet. People need fi can move peacefully. Woman a dead, baby a dead. We can’t walk go down the road. You no affi fi do nobody nothing. Stray shot can kill yuh,” bemoaned one woman.

The citizens want the police to maintain a strong presence in the area, setting up tents at strategic points to bring an end to the violence which has held several communities under siege in its bloody wake.

“It need fi stop. We can’t tek it no more. Curfew a 9 p.m. and people a go in by 7 p.m. Right now, you see how much people pon di road? If you did come this morning, the road clean ‘cause everybody fraid fi dem life,” a woman told The Gleaner.

“We nuh just want see dem today and when dem gone, we here say people dead again. If a ZOSO (zone of special operation) fi stop it, we want it. If a police armoured truck, we want it. Nobody nuh want talk. Everybody a keep a tight lip,” one resident said, adding that Thursday was the first she had awoken to news that nobody had died or got shot.

Chang believes the police will not be able to get a sustained grip on the situation until community members are willing to share what they know with the cops.

He made the comments on the bloodshed plaguing sections of Kingston at the handover ceremony of 47 Mitsubishi L200 pickup trucks and 73 motorcycles at the Office of the Police Commissioner in St Andrew yesterday morning.

Commissioner Anderson noted that the police have reaped some success in recent weeks and had managed to neutralise certain activities of the gangsters.

“In central Kingston, over the past month, we arrested eight gang members and we have some of the gang leaders in custody. We also recovered nine firearms, including rifles, in that space over the last few weeks and 126 rounds of ammunition,” he said. “Similar work is going on in Kingston West. We rolled out a number of deployments and strategies and so we should see what we’ve seen start to trend down again.”

Anderson said the cause of the upsurge is usually fighting over turf, drugs and illicit deals gone bad.

Chang also noted that there has been a significant increase in the number and nature of criminal violence and activities over the last decade in particular.

“There was a time in the nation’s past where even a woman’s wedding ring would not be stolen. That was almost a taboo to steal a lady’s wedding ring. As a matter of fact, there was an accepted understanding that women, elderly and children were not to get involved or become the victim of gang conflict. That was where the line was drawn, but that has changed dramatically and the police have to deal with that,” he said, noting that women and children were now being gunned down in gang violence.

“Children end up being collateral damage, as they would say in the ghetto. Elderly are being attacked; some are being labelled as informers … ,”Chang said, reiterating the shift in trends.

Superintendent Maldria Jones-Williams, commander of the Kingston Central Police Division, promised to keep in contact with the affected communities, while reassuring them that the police would maintain a strong presence in the area.

The current bloodletting is being placed squarely at the feet of two gangs operating in the space, namely the Genaside and Darkside gangs.

“Nuh peace can’t call because one side a say the next side kill more than them,” one resident said in the presence of Chang and Anderson.

The Kingston Central Police Division has seen a 46 and 26 per cent increase in murders and shootings, respectively, since the start of the year.

Up to yesterday, 35 people have been killed, up from 24 for the corresponding period in 2020.

The overall murder record has been increased by three per cent when compared to the similar period last year as a total of 653 have been killed since January 1.