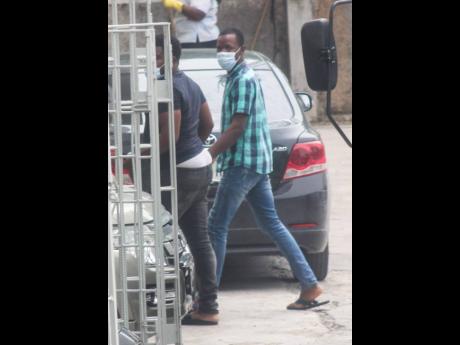 Ashley Anguin/Photographer
Pastor Jason Rose (plaid shirt) is handcuffed to another detainee on arrival at the St James Parish Court for his first appearance after being charged with the rape of a 15-year-old girl.

Kemhi Rose, the wife of the 39-year-old pastor accused of raping a 15-year-old girl, will face the St James Parish Court today on charges that she was complicit in covering up the alleged crime.

Rose has been charged with attempting to pervert the course of justice and a number of offences under the Child Care and Protection Act.

The child’s mother, whose name is being withheld to protect the identity of the victim, has also been charged for pressuring the girl to withdraw her original statement to the police about the March attack.

Parish Judge Sasha Ashley imposed a gag order on parties at Monday’s first court appearance by the pastor, Jason Rose, who is accused of sexually assaulting the teenage member of his congregation.

The press was also turned out of the courtroom.

Prior to journalists’ departure from the St James Parish Court, Mr Rose, clad in a green shirt, jeans pants, slippers, and a surgical mask, sat calmly in the courtroom awaiting the arrival of the judge.

However, lips were not sealed outside the venue as supporters of Rose gave emphatic support as they lined up along the fence adjoining the courthouse.

“Pastor Rose, big up yourself ... . One love, Pastor Rose,” some of the supporters chanted as the accused was led out of the courthouse and into a police service vehicle.

Rose will return to court on July 19.

The lanky accused, who also works as a processing clerk, was charged last week by detectives from the St James Centre for the Investigation of Sexual Offences and Child Abuse.

It is alleged that sometime in March, the pastor allegedly assaulted the teen while she was at the church using the Internet to complete a school project. She was reportedly pulled into a room and sexually abused.

After being initially on the run, Rose surrendered to the Freeport police on June 7.