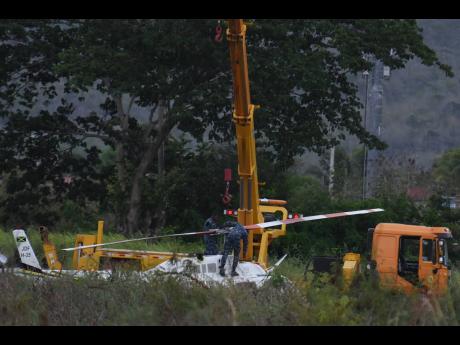 Kenyon Hemans/Photographer
Jamaica Defence Force personnel attaching the helicopter to a crane for it to be lifted on to the back of a flatbed truck for transportation to Kingston after the student-flown aircraft landed in a farm in Dunbeholden, St Catherine, yesterday. No serious injuries were reported. 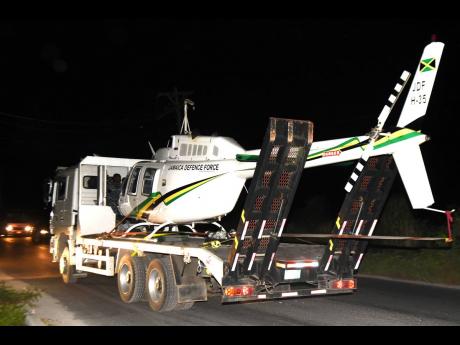 Kenyon Hemans/Photographer
The Jamaica Defence Force helicopter being transported away from the site at which it landed in Dunbeholden, St Catherine, yesterday.
1
2

A Jamaica Defence Force (JDF) helicopter made a precautionary landing on farmlands in Dunbeholden, St Catherine, about 2 p.m. yesterday.

According to the army, the helicopter was being flown by a student pilot, who was stable and had no apparent physical injuries after he was later evaluated at its Up Park Camp headquarters in St Andrew.

“He is being given the appropriate medical support,” the army said, adding that an initial investigation of the aircraft also showed no significant damage.

The white helicopter – streaked with black, green, and gold had the words ‘Jamaica Defence Force’ emblazoned on the sides and was tagged JDF H-35, with an image of the Jamaican flag on its tail – went down after circling the area for some time, according to persons in the area.

Hazel Harriott, who witnessed the happenings from her callaloo farm, told The Gleaner that she saw the chopper flying unusually low overhead before it went down, causing some amount of concern.

“Mi only see when it started to go down. It was circling for a while, and then it slowly went down, and I said to my coworker that the helicopter crashed. Shortly after, I saw the police and JDF vehicles started to roll in,” Harriott said.

The site was sealed off by JDF soldiers and when another helicopter surveying the site landed, the pilot disembarked to inform The Gleaner that the media was not permitted to get close to the area.

A number of farmers told The Gleaner that a helicopter had been hovering over their farm lands for the past four weeks as if it was on a training mission.

“The JDF continues to exercise best practices in aviation and will be conducting the appropriate safety investigation to determine the cause and remedies to prevent a recurrence,” the army said in a release.