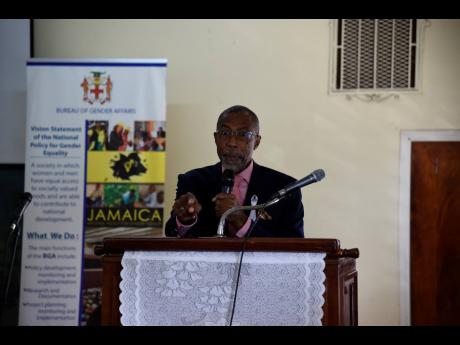 Marijuana smokers were drawn into the firing line of a Kingston pastor on Sunday, the minister using an International Men’s Day church service to rail against a practice he associated with non-productivity and the sense of malaise stymieing Jamaica’s future.

Addressing the theme ‘A Man’s Health is a Man’s Wealth: Men and Healthy Lifestyle Practices during the Pandemic’, the Reverend George Lewis sought to weed out the practice, characterising it as an inhibitor to self-fulfilment and social responsibility.

“We don’t want to be men who just wake up and sit around doing nothing ... . Where is that taking us?” Lewis said, rubbing his palm mimicking the pressing together and rolling of marijuana for spliffs, or cigarettes.

“We need more than that. Occupationally, we need to be well. We need to wake up every day and say, ‘I have a dream, and I am going to pursue this dream in the name of my God,’” he added at the Constant Spring Church of God, where he pastors.

The smoking of marijuana by unemployed inner-city youths and men often carries with it a stigma – a holdover from Jamaica’s punishing decades-old laws that led to prosecutions for even small amounts of weed.

But the possession of less than two ounces of marijuana was decriminalised in 2015 – overturning a convention that doomed young men to having a record that could block their path to a career or overseas travel.

Lewis, though, was insistent that society should condemn the practice of jobless ganja smokers ‘lyming’ on streetsides. He drew on the Adamic narrative of the Garden of Eden to hammer home his point.

“When God designed me, He prepared a garden for me so that I would work the garden and provide food for my family, and, therefore, I cannot sit around doing absolutely nothing ... . I am going to be absolutely productive ... ,” the pastor added.

Jamaica’s labour productivity rate has fallen for decades – but more because of a range of factors and not because of the smoking of marijuana.

However, since decriminalisation, Health Minister Dr Christopher Tufton has campaigned vigorously against recreational use of ganja or the smoking of tobacco-based products.

He has cited National Council on Drug Abuse studies as evidence of a rise in marijuana smoking since decriminalisation.

Lewis’ sermon found favour with at least two fathers who are members of Constant Spring Church of God.

Donovan Forbes, father of two men aged 24 and 20, said he was disheartened by the sight of unemployed youths smoking on street corners.

“I wonder to myself, ‘What do they get out of it?’ I must give thanks that my boys are not focused that way. It has to do with the examples that you set as a father,” Forbes told The Gleaner.

“We as fathers have to be firm but smart at the same time because while, yes, firmness will work, we have to try to think like them and remember when we were their age and think about the things we wanted to do and try to find a balance.”

Another father who declined to be named said that he viewed it as his role to warn his son and daughter to avoid marijuana.

“I believe that I am the one that needs to introduce my son to why he should or shouldn’t, and I am the one that he needs to be able to talk to about what weed is historically ... and why, in my opinion, it has been something he would want to stay away from,” the father said.