Bongo Herman sends off Toots and Striker Lee with music 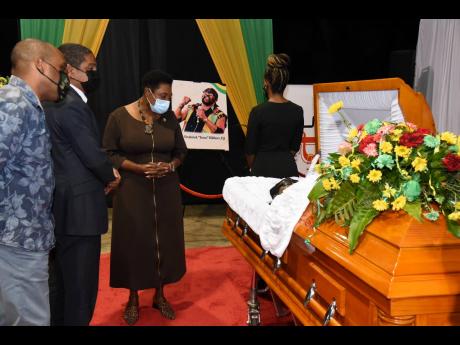 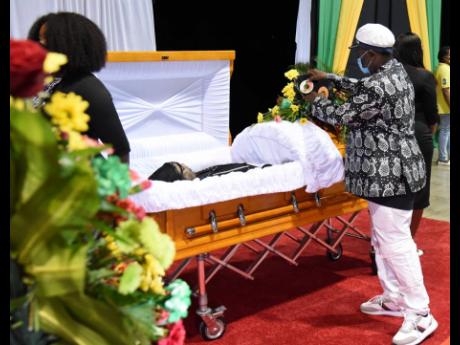 Ian Allen
Herman Davis, popularly called ‘Bongo Herman’, prepares to place a 45 record in the casket of Frederick ‘Toots’ Hibbert, while the body of the legendary musician was being viewed by members of the public yesterday at the National Indoor Sports Complex in Kingston. 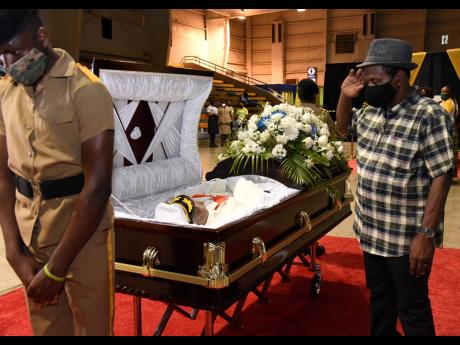 Two 45 records placed on the chests of Frederick ‘Toots’ Hibbert and Edward ‘Bunny Striker’ Lee, with music from the ‘60s era, is how long-time friend and fellow musician Herman Davis, popularly known as ‘Bongo Herman’, chose to part with the legendary figures.

During the public viewing held inside the National Indoor Sports Complex in Kingston yesterday, Bongo Herman, also a legendary player of instrument, personally placed music with songs from different singers into the caskets of the reggae music greats.

Bongo Herman was one of the first to arrive and lined up to view his friends.

“Striker Lee and Toots were very close to me. Sunday, I am one of dem chosen by the minister to play some drums at Race Course, and I will be singing Fly Away Home with a group,” he told The Gleaner.

Bongo Herman recounted that when Hibbert left his hometown in Clarendon he came to Trench Town.

“We have a Nyabingi place right at Arnett Gardens there, and we rehearsed with drums and Jah Jerry from the Skatalites, and sometimes Ernest Ranglin passed through. Toots and his group came and we had to use the drum and Toots had his guitar rehearsing, and many of the times him all drop asleep,” Bongo Herman said.

He played on a few of Hibberts and Striker Lee songs back in the day.

“I was one of Bunny Lee’s main percussion players,” said Bongo Herman, listing songs such as Mumma Nuh Want No Bangarang, Stranger Cole, Police in Helicopter, and another song on the Conversation Riddim that he played for Lee on percussion.

Bongo Herman heaped praises on Culture Minister Olivia ‘Babsy’ Grange, noting that she had a knack for historical relevance in Jamaican music.

“She knows the history of all of us as singers and players of instruments, so she called up on me and I will be doing my part on Sunday,” he said.

For Herman, there are memories of the two great artistes which stood out.

He said that when you are in the company of Hibbert, whom he affectionately called ‘Pawdie’, “you can’t stop laugh”.

Working with Toots in studio, Bongo Herman said he knew precisely what he wanted, joking that if you cough, “him know what key yuh cough inna, that’s Toots”.

As for Striker Lee, Bongo Herman said, “He is great and those days it was one track record, two track, four track, 16 track and 24 tracks. When we in the studio a play and him don’t like the sound, any time you see him love it, him tek off his hat and fling it weh or him start dance and give you some vibes to continue.”

In 2008, Lee was awarded the Order of Distinction in recognition of his contribution to Jamaican music, while Hibbert was bestowed with the Order of Jamaica in 2012.

Family, friends and well-wishers, observing COVID-19 protocols, marched into the indoor complex to view the bodies of the reggae greats.

Grange, Mayor of Kingston Delroy Williams and other officials were in attendance.