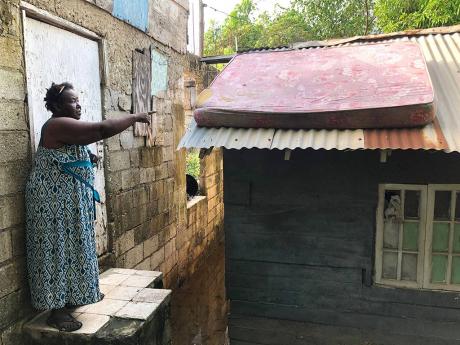 Photo by Andre Williams
Yvonne Sterling sun-dries her mattress atop the roof of her home on Riverside Drive in New Haven, St Andrew, on Tuesday. 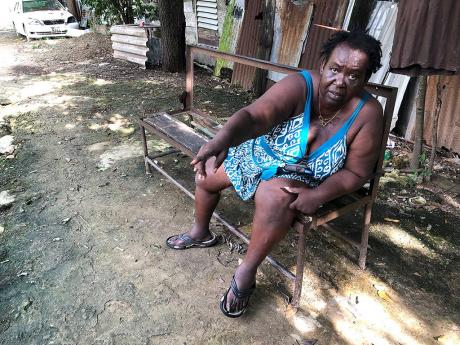 Photo by Andre Williams
Yvonne Sterling, a resident of Riverside Garden in New Haven, is appealing for help after her one-room home was flooded up to five feet on the weekend. 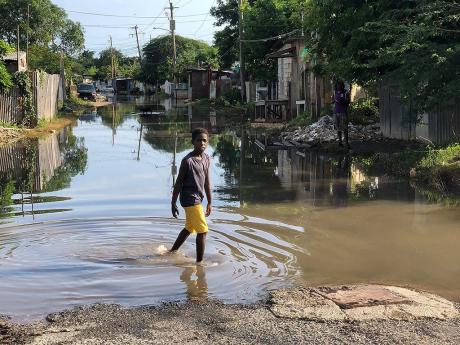 Photo by Andre Williams
A boy walks along a flooded roadway in New Haven on Tuesday. The western St Andrew community is not unused to flooding.
1
2
3

Going through hell. That’s how struggling 1970s reggae songbird Yvonne Sterling summed up her life after a weekend of flood rains swamped her humble home.

Sterling, 64, is one of scores of residents of Riverside Drive in New Haven, western St Andrew, who have been displaced after the Duhaney River overflowed its banks, menacingly swallowed her belongings, and impeded pedestrian traffic.

Sterling was a picture of despair on Tuesday as she surveyed the damage to her one-room home that was ravaged by rain bombs flung from the outer bands of Hurricane Eta.

“I have to walk on the blocks to get in ... . The place is in a bad way,” she said, detailing the flood damage.

“The water come in and go in here so, mash up whole a mi plate. My table and fridge is up by the top of the man’s house … . My dresser can’t open. None of the drawers can’t come out because the water came up to here and swell the board,” she added, showing a five-foot watermark.

Saying she had fallen on hard times, Sterling pointed to a flyer showcasing her halcyon days alongside entertainment stars for a concert in August 1986.

“I am here with all these artistes, see? I am Yvonne Sterling. This is General Trees, Half Pint, Jerome Taylor, Peter Metro. All these artistes are who I worked with on stage. Barry G knows me. He was the MC for this show,” she told The Gleaner.

Sterling said that Sunday’s floods were the second major assault by Mother Nature on that section of New Haven.

“I need to go somewhere and I don’t even have the fare to move ... . Jesus Christ, man! This is something else,” the sexagenarian lamented as she hopped on to concrete blocks to avoid the water.

The If You Love Me (Let Me Know) singer told The Gleaner that when the river breaches its banks and flows into the community, the threat grows of another haunting fear: crocodile attacks.

She remembers well the visit from an unwelcome guest.

“The first time I am here and the river came out, it climbed the yard and go straight out to the front there and go straight into my room. They put the boards there to block out the crocodiles,” Sterling said.

Trevor Green said that the threat of crocodiles trespassing into their community always emerges when water levels rise dangerously.

Green, a longtime resident, recommends that the authorities conduct dredging to remove the build-up of silt.

With more rains forecast for this week, residents of New Haven are nervous about the future.

A technical team from the Kingston and St Andrew Municipal Corporation (KSAMC) was on hand on Tuesday as a tractor operator tried relentlessly to clear a blocked drain.

Xavier Chevannes, acting city engineer at the KSAMC, said that clogged drains leading from Queensborough Drive to the Duhaney River was the nub of the problem.

“We are trying to allow the water to recede because you can see the impact it has on the homes and persons’ livelihood,” he told The Gleaner.