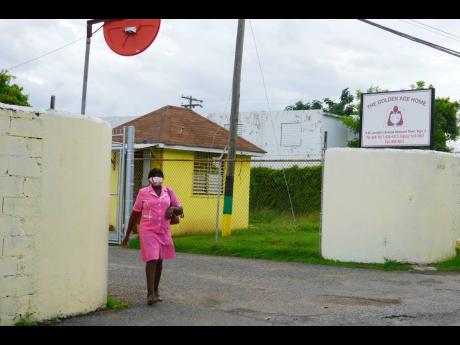 Nicholas Nunes/Photographer
A woman exiting the Golden Age Home in Vineyard Town, Kingston, yesterday. A cluster of COVID-19 cases have been discovered at the elderly care facility.

Residents of Vineyard Town in Kingston have reacted with shock to news of a COVID-19 outbreak at the Golden Age Home in the community.

On Tuesday, the Minister of Health and Wellness reported that a cluster of cases had been found at the home after 72 samples were taken that returned 46 positive findings among staff and residents.

Yesterday, the total number of confirmed COVID-19 cases linked to the facility climbed to 69. So far, 40 residents and 19 staff members have tested positive. Ten cases are yet to be classified.

With further tests being conducted among the more than 400 residents and over 100 staff, the numbers could rise.

“I am concerned because a just right deh so, and so much people over there have it. I used to go over there and walk in the morning, but about two weeks now I don’t go; I change route,” she said.

She said that she had observed some COVID-19 protocols being observed at the home, so the outbreak comes as a surprise.

“I know when the COVID just start out, they were doing it because you have two gates ... . When you go there, they have a tent set up where you have to sanitise and do temperature check and wash hand and dem something deh, so it look like say dem mussi stop do it,” she said. “Dem fall down somewhere … . When I walked in the morning, I see dem do it.”

Though living close to the facility, another resident told The Gleaner that she was not worried.

“I don’t have no reason over there,” she said, adding that she would be fine “as long as it nah blow over here on me”.

Similar sentiments were shared by Georgia Bennett, who also lives nearby.

At another section of the community, a male resident told The Gleaner that the situation was cause for alarm.

“Those people are the most vulnerable. Nuh that dem say? So extra care should have been given. It shouldn’t reach to this,” the elderly man said. “Now it may become a community threat for the area. They better prevent a spread.”

Visitation to the home has been suspended as the authorities try to get the situation under control.

All 428 residents and 162 staff members are expected to be tested by the end of this week.

Health & Wellness Minister Dr Christopher Tufton told a press conference on Wednesday that of the 214 nursing homes islandwide, 206 had been inspected since May, two months after the virus surfaced on local shores.

Tufton also said that the ministry would be moving to increase random testing at such facilities to stave off future outbreaks.