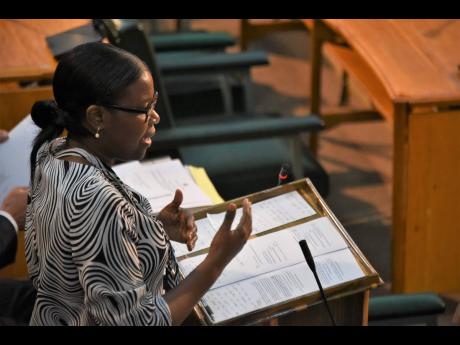 Declaring that access to water is a human right, Opposition Senator Sophia Frazer-Binns is pushing for the Government to enforce building orders which make it mandatory for developers to have water-harvesting systems in multifamily dwellings.

But as a start, she wants the Government to introduce a programme to dole out the so-called black tanks to every household.

She was strongly supported on the Opposition benches with table pounding from her colleagues.

In recent times, several high-rise buildings and other properties have been developed with concerns mounting over whether occupants will be able to access a reliable water supply.

Speaking in the Senate yesterday on the Spring Garden (Irrigation Area) Order 2020, declaring the area to be an irrigation area, Frazer-Binns warned that water security should be a priority for the Government.

“As we move to execute and operationalise the Building Act, we ensure that every building has a system for harvesting rainwater,” the senator said, appealing to Mayor of Kingston Delroy Williams who sits on the Government benches in the Senate.

In June 2019, Daryl Vaz, then minister in charge of the water and climate change portfolios, said a revised Rainwater Harvesting Planning Policy Guideline was completed and the Cabinet submission is being prepared for approval and issuance.

The guideline would be issued to the local planning authorities to be included as a condition of approval for all new residential and commercial buildings, where appropriate, to be constructed, according to Vaz.

“The developments that are taking place now – the multifamily developments – that we find a way to work with the developers to ensure that we secure water for these developments,” Frazer-Binns further urged.

She mentioned that in some eastern Caribbean countries, it is standard practice to have storage for water underground for houses to supplement the main distributor of water.

“If we can do that, then you would not have to worry about situations where the NWC (National Water Commission) has to do maintenance and then has to cut off the main because you will always have water. The issue of water being a human right will be satisfied and the issue of hygiene will no longer be a concern because persons will have water,” the senator contended.

In piloting the order, Senator Leslie Campbell stated that rural development has been given added focus by the Andrew Holness-led administration.

He said no one occupying land will be displaced with the passage of the order.

Earlier Senator Lambert Brown had questioned who are to be the beneficiaries of the irrigation area.

He expressed concern that the Government might be preparing the land and big investors would push small farmers off, as it would not be equipped with irrigation mechanisms, making it more attractive.

The order was eventually approved with support from the Opposition.