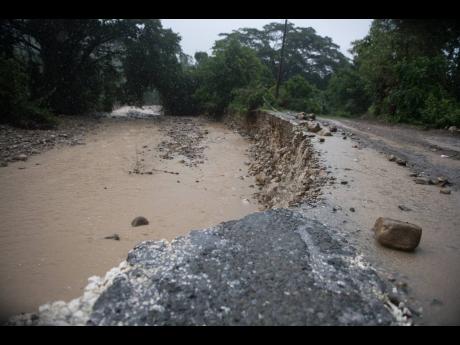 Gladstone Taylor/Multimedia Photo Editor
Silt covers the Georgia main road in St Thomas as a section A section of the roadway is being eroded by a river on Friday October 2. The NWA boss has noted the physical damage caused to road by landslides but says most of the roads being eroded across the island are because of poor drainage and inadequate infrastructure.

The National Works Agency (NWA) is blaming Jamaica’s decades-old drainage problem for flooding and subsequent damage to roadways across the island after heavy rainfall.

NWA Executive Director E.G. Hunter told The Gleaner that a master drainage study was commissioned years ago for the entire country, and stakeholders were now considering how to go about implementing a fix.

“[It] identified that the drain cleaning across the island would cost US$1 billion. So that plan exists. When anyone talks about where is the plan, there is a plan, but how do we implement that plan [and what’s the] rate of implementation?” he said yesterday.

Several roads across the island have been damaged by recent rainfall, with Maxfield Avenue, one of the newly rehabilitated thoroughfares, becoming the latest in the Corporate Area to be damaged by water.

Hunter said, however, that there has to be periodic improvement in the capacity of the drainage system.

“We have done drainage work in some of the major projects that have been done, but still, there is a lot of drainage work that remains to be done ... . There have been major road projects, but there have not been major drainage [works],” the NWA boss told The Gleaner.

He said the agency is on record saying that a drain-cleaning experiment is to take place within the lower Maxfield Avenue and Tinson Pen areas and that by month end, a presentation should take place.

He told our news team that the agency is working through the infrastructural issues in a methodical way and understands that people would like to see changes immediately.

“You don’t replace major infrastructure overnight. We talking about major expenditure, and that requires significant and intelligent analysis and study before we go to implementation,” Hunter said.

He said that some of the road issues were was not caused by rainfall, but by damaged National Water Commission (NWC) pipes.

“That has nothing to do with the rain ... . NWC pipes broke. Anywhere you have a pipe that breaks, the water takes out anything else around it,” he said referring to Monday’s damage on Arthur Wint Drive and Wednesday’s debacle on Washington Boulevard, both in St Andrew.

Hunter said that the damage just happened to have occurred during rainfall.

“Of course, there is an impact on the physical infrastructure as a consequence of the rain,” he admitted, however. “That manifests itself in landslides, which cause roadblocks; intermediate flooding of a number of water ways ... and manifest in great inconvenience to the travelling public. No one is denying that.”

A section of Olympic Way in St Andrew also collapsed on Wednesday. Thoroughfares such as Marcus Garvey Drive, Chelsea Avenue, and Molynes Road cause major headaches for motorists and pedestrians after heavy rainfall.