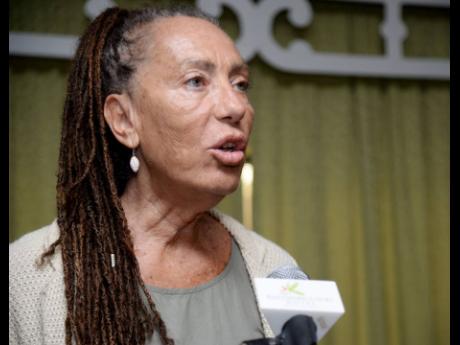 File
Carla Gullotta, executive director of Stand Up For Jamaica.

Prisoner rights activist Carla Gullotta has reiterated her call for the release of juveniles and low-risk inmates, proposing that at least 300 all told be freed from correctional facilities .

Her advocacy comes hours after the Ministry of Health and Wellness revealed that seven more people had died from COVID-19, with overall infections nearing 5,000. Sixty-seven people have succumbed to the disease.

Inmates have also made contact with The Gleaner, alleging increased quarantines and testing at the Tower Street Adult Correctional Centre at the weekend. They have characterised the situation as chaotic.

Gullotta, executive director of Stand Up for Jamaica, has warned that both the Tower Street and St Catherine maximum-security prisons pose a threat to inmate safety because social distancing – a key imperative of coronavirus protocols – cannot be enforced.

Tower Street, with a capacity of 700 inmates, and St Catherine, with 400, have more than double their capacity. According to the activist, cells that are meant to accommodate two persons sometimes have six.

Gullotta said that vulnerable inmates such as juveniles and the mentally ill are among those who could be given bail.

“If you send out 300 of them, probably the drama will not be as big as it is now. There are cells at Tower Street where people sometime have to sleep, some on the floor and some up in hammock because they don’t have any space, so the family buy hammocks for them. Two are on the floor and two ‘upstairs’... ,” she said.

The creeping threat of the coronavirus – which is in the community-transmission phase in Jamaica – reinforces the need for low-term inmates, like those prosecuted for larceny and fraud, to be released, she said.

NO SPACE IN PRISON

“Minister Chang did a presentation in Parliament stating that in the prisons, there is enough space ... . Space in a prison? Are we kidding?” Gullotta charged.

Minister without Portfolio in the Ministry of National Security, Matthew Samuda, referred The Gleaner to Department of Correctional Services’ web portal for the latest data on coronavirus testing.

Checks on the website up to midday on Sunday showed that 56 inmates had been tested.

Sixteen results for inmates and warders are pending, and total inmate infections, all at the Horizon remand centre, remained at four.

There was no information on the dashboard relating to cases at Tower Street.

However, on the prison staff count, a total of 66 workers have so far been tested. A total of 20 staff results are pending, while 11 have tested positive.

The breakdown among staff per institution is DCS headquarters three, Horizon one, St Thomas Probation five, South Camp Adult one, and St Catherine Adult one.

Samuda denied that chaos exists at any of the facilities though acknowleding that there are expected anxieties.

No inmate has died from COVID-19, he said.