Psychiatrist warns against deadly jokes - Hurtful words could push people over the edge, Shetty warns in light of teen’s suicide 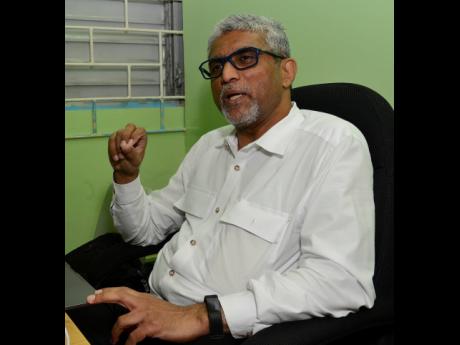 Although a “light moment” with a sibling hours before 17-year-old Chrisey-Ann Davis took her life was struck out by her mother as the reason for the tragedy, psychiatrist Dr Ganesh Shetty is warning that sometimes making jokes about persons in pain or suffering from disabilities could push them over the edge.

Davis, for reasons unknown to her family, is believed to have hanged herself with a telephone cord at her Mona Common home in St Andrew on Monday. However, there are theories that she might have been troubled by psychological trauma from a nagging back injury and the life changes caused by her limping gait.

Shetty, a respected child, adolescent and adult psychiatrist, told The Gleaner that while unable to speak to the specifics of Davis’ case, jokes about her condition could have contributed to the tragedy.

“Physical and emotional pain, and injury to a teen’s self-image and self-esteem, depression, sense of hopelessness about the future being better, adolescent impulsivity play a role in such very unfortunate incidents,” Shetty told The Gleaner.

He said thoughts of suicide are usually triggered by mental disorders such as depression, post-traumatic stress, and bipolar disorders.

“Acute loss or rejection, impulsivity, access to means to self-harm, exposure to traumatic experiences like physical, emotional, and sexual abuse; bullying; witnessing violence at home, school, and communities; feelings of hopelessness or helplessness; aggressive or disruptive behaviour; drug use; family history of suicide attempts can all contribute to increasing the chance of a youngster thinking of and attempting suicide. [These] could push the youth over the edge,” he added.

Shetty is urging family members to keep an eye open for signs of distress, which could trigger suicide. Such signs, he said, included significant emotional changes for days and weeks, withdrawing from people and fun activities they once enjoyed, appetite changes, sleep-pattern changes, and decline in school performance.

“Sometimes emotional distress can be expressed as physical symptom, such as stomach aches, headaches, fatigue, without any medical cause to explain them,” he added.

The psychiatrist said that parents should seek professional help for children exhibiting such warning signs.

Some 42 per cent of attempted suicides treated at hospital are children and a U-Report poll conducted in 2018 indicated that 53 per cent of U-Reporters had considered suicide.

Joan Watson, Davis’ mom, told The Gleaner that what transpired between Chrisey-Ann and her other daughter was not a fight, but their usual playful verbal jabs, and she did not believe that that should have triggered her subsequent action.

“Dem a play, [and] the next sister turn to her (Chrisey-Ann) and say, ‘You cripple’, and ... Chrisey say she have a whole heap a pickney, so how dat go? She turn to her and say, ‘But your baby cripple, suh how that go?’, but she didn’t show any sign that she and her sister cursing,” Watson said, adding that it was common for the siblings to jokingly throw jabs at each other.

Andrea Gray-Dwyer, acting principal of Kingston High, said the school community has been in shock since the news of Davis’ death.

“We are deeply saddened by her passing ... . Our students are a part of our family, and teachers would have been speaking of the qualities of this young lady all day (Tuesday). She was a very valuable member of the Kingston High School society,” Gray-Dwyer said. “She came here in grade nine, and she was a very diligent student. In fact, we were looking for great things. I am not aware of any challenges that she was experiencing.”

According to Gray-Dwyer, the closure of schools due to the coronavirus pandemic may have created a void.

“The counsellors would have spoken to having sessions with her, but with the COVID-19 and persons being out of touch, I can well imagine, you know, what situation would occur for that to happen, but the details are very sketchy, so I am not sure of the intricacy, but we just want to express our condolences,” she said.

The Papine police are investigating the incident.

– Get help from the nearly 20 child guidance clinic sites islandwide.

– The three child guidance clinics in Kingston and St Andrew are located at the Comprehensive and Glen Vincent Health Centres and at The University Hospital of the West Indies.

– Jamaicans aged 13-29 can join U-Report and access the suicide-prevention tips by messaging the word “HELP” to U-Report via the two messaging services upon which it operates in Jamaica: @ureportjamaica on Facebook Messenger; or 876-838-4897 on SMS (text messages are free for FLOW customers)

– Teenagers may neglect their hygiene.

– Start or increase in using drugs or alcohol.

– Becoming rebellious and violent or running away.

– Being preoccupied with death and dying.